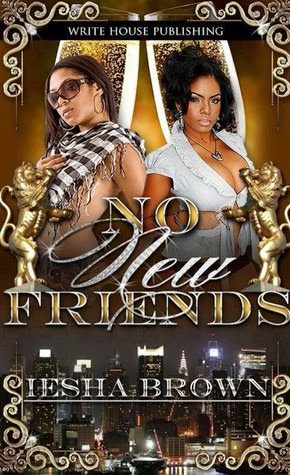 No New Friends by Iesha Brown

Antonia has a hustle on and off the streets. She was a gorgeous girl and knew it. When I first met Antonia I just knew I wasn't gonna like her because of the road she chose with Bridges. One day on her hustle she got caught (although she was set up with drugs she never had) she was given two options, prison or work for Bridges. She knew he could do what ever he wanted being in the position he was in. So being a young woman, alone and afraid she picked option 2. Growing up in the Bronx, she knew that doing this would get her killed if it ever came out, but Antonia had to make a decision. She decided on her and her crew! She knew how to make money and keep everyone she cared about covered. As long as she did as Bridges said he left her and her crew alone to their little hustle. You have to wonder how long that would last!! IJS!! It all comes out in the wash...Snitches get found in the Ditches!!
Away from her hustle life she had another life that included a mother and an eight year old son, Torrence. Her mother has no knowledge of her hustle she thinks she still works as a file clerk in an advertisement agency. As long as Antonia broke her off every once in a while, paid her mom's rent and kept food in the refrigerator she was happy. She loves her daughter and her grandson, but she loves that dollar bill too!! Antonia used this knowledge to bribe her mother into letting Torrence stay with her (while she built her stacks up).
This is really a good book when you get into it! Iesha Brown does a great job of grabbing your attention and holding it throughout the book. The surprises of Antonia and the things she does to keep her family and eventually her man out of harms way will have you holding your breath! Antonia has mostly been a loner until she decides she wants Esco. Esco, owwweeeee with a smooth Cherokee-like complexion and long dreadlocks was a dream man! After their first meet at the club they became inseparable. Esco shows Antonia his world, as his woman, not knowing the information he is giving her for Bridges. He takes her everywhere with him, so trusting..........Carefully she picks and chooses carefully what she leaks. Never turning on Esco! She knew how to hold her man down and be that ride or die chick, for real!!  Or was she??!! HHHHMMMMMMMMMMMMMM!!
However, all good things must come to an end or does it? What does the word LOYALTY mean when a woman is caught in the middle of keeping it real with her team, that's been with her, by her and secretly working against them? Antonia’s struggle with the things she has to do and the love she has come to know leads her to another decision that could cost her everything! What would it be? Honesty with the man she has come to love and take the chance of him or his crew killing her or keep the secret?
"I should body your ass right here," Esco said through clenched teeth.
Baybee I thought he was gonna choke the life outta her ass!!! Esco's crew finds out about what Antonia did and decide to take matters in their own hands, without Esco's knowledge!
BIG MISTAKE!! This damn book just got off the chain!!! You gotta buy this book to see what happens next! Will Esco choose her or the crew? Will the crew make his decision for him?
Lawdy!! We are gonna met Antonia's daddy and OMG..........surprise, after surprise, after surprise!!
"Esco was a powerful man, but he didn't come close to Antonia's father.....If anyone could make people disappear and stay gone, it was the Italians."
Who Knew!!!!!!!!

Buy the book and hang on! You will not be disappointed!!
~Benita (556 BookChicks)
Posted by Unknown at 3:03 PM