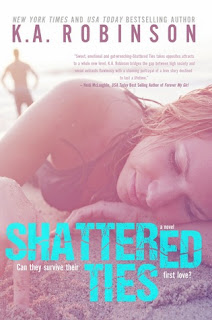 556 Book Chicks applauds K.A. Robinson...
K.A. Robinson quickly became a 556 Favorite with her Torn Series, and she delivered another hit with Shattered Ties. But I have to admit that I was on the fence when I realized that Jesse and Emma were still in High School. But this book was so freaking good...I could have cared less about them being anything other than Jesse and Emma.

New student Jesse Daniels has been accepted to Hamrick High School on scholarship...but he is not at all excited about entering holy snobby hell. Then he sees her - the little girl from the playground that reminded him everyday that he was not good enough for some people - and he knows that the year is going to be worst than he ever imagined. Emma Preston is not the same little girl from the playground, but her mother is and Emma has to play along with mommy dearest for now.

Emma and Jesse fall into a comfortable friendship. He makes her feel alive and free. Either of them can deny their attraction to each other, but they have to find a way to hide it from everyone else. But Jesse is not keen on being Emma's dirty little secret. Can their love survive being born on the opposite side of the tracks?

So one of my favorite moments...when Emma took Jesse to London. Ugh yeah she took him to London, her father's band was on tour over there and she convinced Jesse's mom to let him go. Anyway she failed to mention to her dad that she was bringing her boyfriend to London and when he walked in of them the next morning I was holding my freaking breath. 'We were busted, and I knew it. There was no point in Emma trying to lie. She'd only dig our graves deeper in the process.' I have to say that Jesse handled himself well against Emma's dad.

My Oh No She didn't moment...was when Jesse's friend Ally kept harassing poor Emma. I was like if Emma don't set her straight soon things are going to get worse. And to hell  if they didn't go from bad to worse quick..that damn Ally finally got her chance to corner Emma, "You think you're so badass, walking around with Jesse like you own him. Well, I've got news for you. He's mine, and you need to stay the fuck away from him." I was staring at the book like say what now...oh no this witch didn't go there. But don't think for one minute that is all Ally has up her sleeve.

I am telling you - you will become so engrossed in this book that you will not want it to end. And the way it ends - Ugh! When I finished the book I closed the kindle and opened it back up and reread the final page - I looked up and said F-you K.A. Robinson. LOL! I could not believe she left me hanging like that. So you already know my anticipated read for 2014 is Shattered Ties - Book Two!