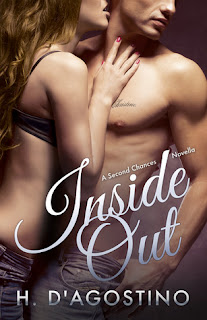 Inside Out by H. D'Agostino

556 Book Chicks fall hard for Colin...
Holy Mother of Playboy this cover is HOT! And the book matches the cover with its sizzling hot playboy Colin Simon. H. D'Agostino keeps bringing the heat in her Second Chances Series and this novella puts another notch in her belt.

Colin Simon the ultimate playboy falls hard for his best friend's sister-in-law Amy, but Amy is not bending her rules for Colin. I loved how Colin pursued Amy and had her questioning her life. Amy once had the perfect life (in her mind) wealthy husband - career plans, but the douche cheated on her time and time again. So now Amy is bitter and she is doing things her own way!

But she cannot deny her attraction to Colin and things begin to heat up at Melanie and Austin's wedding. 'Sweat began to bead across Colin's shoulders as he worked harder and faster. Amy was a responsive woman, and he knew he was pleasing her by the sounds she was making. He leaned forward, placing her on her back so he could offer more power and force behind his thrusts. The harder he slammed into her, the more vocal she was getting. She liked it a little rough - that was obvious.' Now the average woman would have cuddled up next to Colin and staked her claim to him...but not Amy she got the hell on and fast! LOL! I was screaming "Don't do it Amy...don't you run damn it." LOL!

Colin and Amy's story will have you screaming at her a lot. You will fall hard for Colin though - it kind of sucks how we always end up taking the guy's side. But oh well, in this case Colin was in the right! Go Colin - Go Colin - Go Colin!!!! If you think I am giving you anymore insight think again...go 1-click the book!
Posted by Unknown at 2:48 PM