THE UNCONDITIONAL LOVE OF A CHILD WITH NO REGRETS!!!! 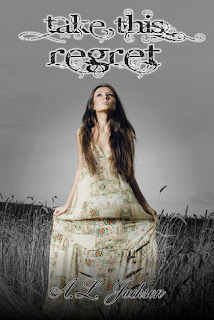 Let me just say I LOVED THIS BOOK! Upon first read I got the impression that it would just be a love story about how two very different college students fell in love. I thought Christian and Elizabeth was gonna get married and continue with their college pursuits to be attorneys.
Bayyybeee when she told him the news and he issued an ultimatum, I said Hell No he didn't! Feeling betrayed with a shattered heart she left. With the help from her friend Matthew, Elizabeth made a decision and began her life without Christian............or so we thought!!
At this moment I'm team Elizabeth! The thing that made me feel better after I thought she was going to be alone was the fact that Christian was miserable and was always thinking about how he turned his back on her and the family they could have been. He did indeed feel regret. But the coward that he was, she wouldn't know that he ever looked for her or even went to the hospital until years later.
FIVE years to be exact...

Christian moved to Elizabeth's home town of San Diego to run one of his father's law offices. Even though his parents had divorced several years earlier he worked for his father. The move across the country was a welcome move for him. He and his mother became very close after his parents separated. His father was a controlling tyrant! He got just what he deserved!!!

What were the chances that Elizabeth came back to her hometown? HHHUUMMMMM......
Although Christian never saw his child, I loved how the author wrote the grocery store scene of his first awareness. The way he was drawn to her and she to him. From the first time he saw her he was determined to get his family back and by now you have read and know a little more about the story.
Now I'm Team Christian! (Hopeless romantic) LOL!

"But it was her eyes that stopped my heart in my chest. Their intense blue watched me in fascination, wide and intrigued and so familiar."

You have got to read it!!! I immediately feel in love with Lizzy! There was no turning around after that. She was my heart throughout the rest of this book. A child's love is so pure! After Christian saw her that first time I wanted him to suffer but then realized that would mean Lizzy would suffer too and I didn't want that. Even after 5 yrs when Elizabeth heard what happened at the store from Natalie  she knew it had to be Christian. Lizzy couldn't wait to tell her mommy about seeing the nice man.

“Was that my Daddy?” All the air left me as her timid, soft words came like a whisper into her dim room. They were filled with such hope. A single tear slid down my face as I nodded. “Yes, baby, it was.”
Elizabeth panicked and immediately thought he came to take Lizzy away from her. She immediately put up her guard and tried to keep him out of their lives even after he showed up at her house seemingly stalking them.

"He was so desperate as if his life depended on whether or not he saw Lizzie again."

You know it......TEAM LIZZY!!!!!
You have got to read about Christian and Lizzy and how they immediately bonded from the first meet at McDonald's. She thought her daddy didn't want her but now he was here for her and she feel deep in love with him. How he calls her every night before she goes to bed at 7:15 without fail. She not only got a daddy but she also got to know her grandmother and that was great. I was so glad Christian's daddy got what he deserved a low down dog!!!  Matthew was great! Matthew was always there for them since college! Even after a romance with her didn't work, he still loved them they were his family.

I was shocked as to how far Elizabeth went to hurt and get back at Christian. Although that's not what she intended she nearly broke her daughter! It tore our hearts out! I cried like a fool!!! Christian was determined that he would never be separated from his daughter again and he would do whatever he had to do to keep his promise to her. I don't want to give any of that away you need to read that for yourself!!!
Buy the book!!! Buy the book! There is sooooo much more to read about!! All the interactions with Christian and Lizzy is heartwarming. Be ready to love, laugh and cry!! Don't judge me!!! Buy the book!!!

A L Jackson you did that!!!