I could not put this book down.... 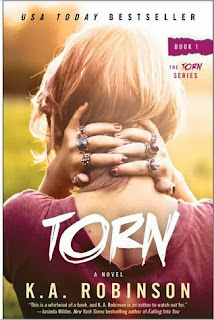 556 Book Chicks give thanks...
OMG, I have to thank the Book Gods for dropping this book in my lap! I mean really I was just saying I needed a book to make me fall in love with books all over again. And Lord knows I found in it Torn. This was a really good book - I am still thinking about it a week later. Wow!

Torn was funny and sarcastic...it was me! Every girl can see a little of themselves in Chloe...a good friend, a little weird but in a cool sort of way, unaware of how beautiful she is..."You're one of the sexiest women I have ever seen and you have no idea just how beautiful you are, do you? You have no clue the effect you have on men, on me." Hmmmm...Then there are her best friends Logan and Amber. Hmm! I like Amber by default, she was there for Chloe when she needed someone the most, so she kind of gets a free pass with me. But Logan I didn't like him from jump. My cousin thinks he is all sweet and every time we talk about him she says awwweee poor Logan. I on the other hand thought he was a little Biotch! Sorry but no bueno to Logan!

One of the funniest moments was when Amber and Chloe went to a party, and Chloe was walking home from the party and she tripped. OMG like I could totally picture that crap happening. 'I started walking in the direction of my dorm when the spike on my heel caught in a crack on the sidewalk. I flew forward and landed face-first with my ass sticking up in the air.' Tell me you aren't cracking up right now! I was dying laughing. But I would fall a million times if that means Drake Allen would pick me up! 'Mr. Tall, Dark, Tattooed, and Pierced...'

So Chloe is not looking for love but finds herself in a freaking love triangle!!! Oh yes honey - I said a love triangle. Drake gives her the tingling where it counts, but Logan has been her friend for so long and she can trust him. Logan was so annoying to me - I want to take me out myself. LOL! How can you get friendship confused with love? Like he saw the way she was with Drake - he had to know her feelings for him were not the same. Yet, he kept pushing her to enter into a relationship with him. That's what made him a little Biotch to me!!! But in defense of Logan, Drake pushed her to him. Then when she was gone of course that's when Drake realized he wanted her back! Typical damn man!

When someone is running through your veins like that - it's going to be hard to move on from it. So you know if you taste test it - once will not be enough! "If you want me, take me. If this is what it takes for us to get each other out of our systems, then we'll do it and move on." It's kind of like the potato chip commercial where you can't have just one...Hmmmmm! I know you are dying to find out what happens! You don't want to miss it.

I was ready to bring out the boxing gloves on two people. 1. Amber - sorry I said she gets a free pass and this is true, but there is a part of the book where I was mad about where her loyalty was. As the men say Bros before Hoes - well it works the same for us (or it should) Chicks before (oh my)! I bet you thought I was going to say it...LOL! You can fill in the blank! And 2. Chloe's mom - was a b%tch from another planet. I wanted to strangle her. How can a mother be so darn heartless? "I'm your mother, whether I want to be or not, so I'll talk to you however I want. Now, where are you? We have some things to discuss."

There is so much to tell...tattoos, piercings, rock bands, car sex (and not inside of the car sex), did I mention bands and piercings already? I have to say thank you again to the Book Gods for making K.A. Robinson tell this story! Absolutely loved this book!