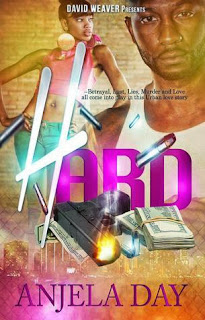 556 Book Chicks Goooo Hard....
We love when we are introduced to a good Street-Lit book! Especially when the book can take you places - and you be like dammnnnn did that just happen. Oh Yeah - Anjela Day did all that and more in Hard. Before we even get into the review, we have to give you our favorite quote by the three brothers running the show in Hard.

Dinero (The Boss) - "I'll shoot my way into heaven because I was born in the trap, raised in hell, and like a phoenix I'll bust out that Bitch and set the sky on fire." BOOM!!!

Sacario (The King) - "Born killer, playboy, and self-made hustler. Royalty is all I could be. Hell, I was prince charming. I could charm the devil out of hell." BAM!!!

Ali (The Brains) - "I have nothing to prove to this world so I don't need a flashy title. I'm neither the king nor a boss. But you fuck with my family and I'll be the last thing you ever see. Call me what you like but know if you call, I'm there." POW!!!

Now that you have met the brothers lets get into the book...after watching your father murder your mother and then turn the gun on himself...the brothers find their way out of foster homes to running the streets of Detroit. They have the drugs and clubs on lock in Detroit, but we all know just when everything is going right someone is looking to knock you off.

Let us tell you Dinero is the meanest of the brothers. He just gives it to you straight and raw! And on Sacario's wedding day to the Gold Digger, Janet, only Dinero can threaten a bride and make you fist pump him! Please believe this is like no wedding you have ever been to before. But Sacario can't seem to shake drama with his women. He finds himself right back in a dysfunctional relationship with Lanya.

'Drowning the sound of Janet spend his money with thoughts of Lanya. He had really connected with her. Funny, he didn't believe in love at first sight but this girl had made him think it might be possible.'

Since there are so many characters are sooooo much drama...at times we found ourselves flipping back pages to read it again. If you not paying attention you will think you lost...but don't worry the drama will pull you back in. That was one of the things we loved most about the book! The drama - the action - the not knowing what to expect was great coming from this book.