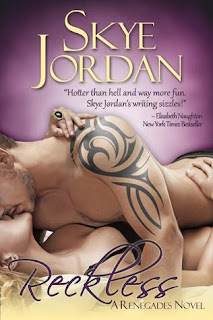 556 Book Chicks Speak...
So let us just say that the book was just okay. We loved Jax Chamberlin and just thought that Skye Jordan could have done so much more with his character than Lexi.

Jax Chamberlin, ex-actor, undercover wealthy, now movie stunt man is HOT and possibly every woman's dream. But he has been used by the best of them...wanting a role in a movie, to be introduced to the next big star, or just a little cash to tide them over. Jax is tired of being used and he is avoiding women all together.

Meanwhile, Lexi is trying to find her way in the fashion world. She is making killer couture dresses for a hefty price, but she is ready to take her career to the next level. Taking her career to the next level could mean no time for fun and definitely no time for a man like Jax Chamberlin. Truthfully, Lexi thinks that Jax's image is all wrong for her career. And that pissed us off that she would judge him by his appearance and job description. Snob much Lexi!!!

Well the story does have its good moments - you know Lexi caves in to Jax's sex appeal. And we loved the way he turned her out. Go Jax - Go Jax - Go Jax! 'He groaned, his hands moving over her like he couldn't touch her fast enough. His mouth eating at her mouth like he couldn't get enough of her taste. He pressed her against a wall, but she couldn't remember moving from the middle of the living room. His hips sank deep between her legs, and a fierce shot of pleasure arched her back. She broke the kiss on a moan.' Bayyybeee can you say Jax was putting it on her.

So what didn't we like about it...well it may have been a little too much talk about the fashion world. Like really we didn't care about fabric or her making dresses...and we didn't need it to understand the chemistry between her and Jax. And a lot of scenes with Lexi made the story kind of boring.

But Lexi had a kick ass best friend, Rubi. Why is it that the best friend is always the carefree, fun person? It is settled we only want to be the sideline best friend and not the spotlight. LOL! Hell it was Rubi's great invention that got Lexi and Jax together in the first place.

We will say that Lexi redeemed herself at the end...what she planned at her fashion show was so very sweet! But we are not even going to give you a hint...you have to read the book!