You can't slow down when it's this good... 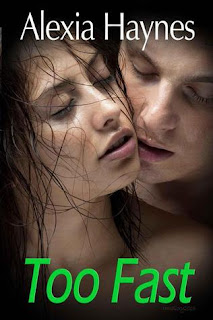 Too Fast by Alexia Haynes

556 Book Chicks chat...
I was checking out the reviews for Too Fast and I was thinking what were they reading??? Don't be fooled by the reviews, this is a good book! It was a real story - it wasn't your normal happily ever after situation, but that is what made it real. I would totally recommend it to our 556 Book Chick Followers!

Savannah is a college student on the search for her first ever one-night-stand! Too busy working and studying there is just no time for a steady boyfriend, so why not get laid one good time and move on. But that's kind of hard to do when you pick the sexiest melting pot in the room. 'The man wasn't even my type, and I had no idea how I'd hooked up with him. Apparently, Savannah on tequila shots had higher standards for a man's physique. Skinnier, artsier, and disenchanted was more my style. Luke had muscles, vitality, and testosterone. Boyah!' LOL! She was already on her way to breaking this one-night-stand agreement, even if she didn't want to admit it. And its really evident she wants to go back for seconds when her friends are sitting around talking about having their go at poor Luke. 'I didn't want Aubrey's nasty, Chlamydia-riddled claws anywhere near Luke. Oh sure, I knew she was probably disease-free despite the odds, but I didn't even want her looking at him, much less doing him.' Oh yeah Luke had definitely did some things to little Savannah and she wanted more of it.

Luke was not your normal 20 year old! He was hard-working and responsible, but he didn't have a choice to be anything else. He was practically raising his teenage sister. He didn't need the extra responsibility of a relationship, but he also didn't want to let Savannah go! "You are the most beautiful woman I've ever seen." I kicked off my boots as I climbed onto the bed, carefully placing my knees on either side of her. I looked down into her green eyes. "Your luscious lips," I said, kissing her gently on her bottom lip. "This feisty little nose ring that taunts me when I look at you." I kissed the stud in her nose. You get the picture Luke was way past the take it slow mark - he was already gone!

They were offering each other something they both were missing - LOVE! 'Something about having her hold me like that made me feel, well, loved.' Awweeee Luke we'll hold you! LOL! But we all know that with every relationship comes the test! And Luke will have to choose between taking care of his sister or being in love with Savannah. And his mother doesn't help with falling off the wagon every chance she gets it. The decision is crystal clear to Luke, but will he be able to live with it?

Take the ride with Savannah and Luke, you will not be disappointed! Awesome book by Alexia Haynes! Oh yeah we didn't need to tell you, but LUKE definitely made the 556 Book Boyfriend list.