She gave him too many chances... 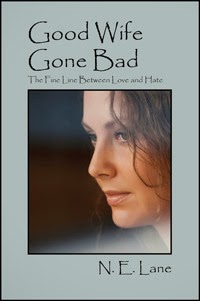 556 Book Chicks speechless...(in a good way)....
I have to be honest I did not think I was going to like this book, and I was  right...I LOVED this book. I could not put this book down. New Adult books are created from classics like 'Good Wife Gone Bad.'

Why did I think I wouldn't like it? Well it was set back in the day..like during the war when soldiers were getting drafted. But it was so well written that I forgot it was even during the Vietnam era. N.E. Lane captures your attention from the beginning and sucks you in until the very end.

Amanda was born to feel the void of the death of her parent's second child, Freddie. Because of what happened to Freddie her parents of course were overprotective of her. It was a great idea for N.E. Lane to start the book back so far because you became invested in her life story.

What I loved about this book...it was REAL. There is no better word for it. Any woman that has ever been in a relationship (good or bad) can relate to this book. Amanda was young and naive, she had only been in "puppy love" before she met Jim. Jim was older and I think he preyed on the fact that Amanda was naive. There were so many warning signs before she married him, but when you are in love you always miss the signs. I was actually glad when Jim walked away - I thought for sure she would just meet someone that could love her forever. Yes, I found myself praying for Amanda.

The part where I broke down...Amanda was finally realizing that her and Jim were not meant to be together. Jim had too many secrets and he enjoyed his freedom far too much. She started confiding in her friend Alan about her situation with Jim, and over the course of time they began to develop feelings for each other. Amanda just could not find it in her to walk away from Jim. 'It was like I'd been struck by lightning! Reality was hitting me smack in the face! I was living a fantasy when Alan and I were together, but this wasn't casual; it was quite serious!' I wanted to shake her and tell her to leave that sorry ass Jim and choose Alan. Ugh I am still frustrated at how many great men she let slip through her fingers.

Amanda was confirmation as to how strong women are and how much we actually tolerate. There are just so many things I want to talk about, but I don't want to tell the story. 'Good Wife Gone Bad' is a MUST READ! I will say this I don't think she got bad at all...with all the stuff Jim put her through she should have Snapped on his behind.
Posted by Unknown at 7:01 PM