You don't need your eyes to feel... 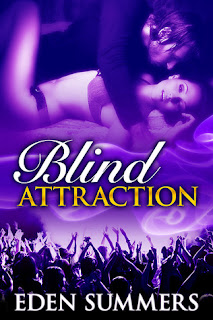 556 Book Chicks rockin':
You have to read this book! It's actually really good. It's kind of scary when you don't know what to expect from the book. First time reading Eden Summers and I was not disappointed at all. 556 Book Chicks freaking loves Rockers! And its been a while since we read a Rockstar book!

Alana is simple! There is really no other word to describe her. She is not your normal rockstar groupie at a concert. She is at the concert with her best friend, Kate (the typical groupie). But Mitchell Davies is not looking for a groupie tonight. The attraction he has for Alana is too much to ignore. He invites Alana out for a drink after the concert. He has it so bad...and he barely even knows her name. And his band mate Blake is giving him no slack for his feelings. "I'd kiss your knuckles like my boy Mitch did, but I think he might castrate me in my sleep." Oh yeah Mitch has it bad!

But when the accident happened and the vase caught Alana in the eye. I was like...eeeeerrrrrrrrr I know damn well this girl is not going to be blind...then I looked at the title of the book and said OMG she is going to be blind. This sucks! But it wasn't what I thought...whhhhewwwwwww (wipes eyebrow). She just had a minor set back and it made the story super sweet! Awwweeee! It actually helped her come out of her shell. She was able to relax and stop worrying about the things her mother had embedded in her about men. She was funny and kick ass when she wasn't worrying! She even put Blake in his place once - when he was suggesting that he could stay and hang with her for the day. And she was like that would be cool since you are gay. LOL! Blake was dumbfounded with her accusation. 'Mitch's laughter grew, echoing off the walls. Blake sat in silence, blinking at him with a gaping mouth. His girl was a tease, and a hard ass. He leaned over, placed a kiss on her cheek, and gave a cocky wink back to Blake.' I hope you didn't miss that Mitch referred to her as his girl. *Two snaps*

Eden Summers takes us along for the ride - as Alana matures, falls in love, and becomes the woman she wants to be. And it is amazing to get to see a character grow within the same book. Normally you have to wait until the 2nd or 3rd book to see a character mature. So kudos to Eden Summers for the breath of fresh air. But Eden you do not get off that easily...that scene with Alana, Mitch and Blake - was a say what now moment! That was crazy!!! Literally had to turn back and read it again because I thought I had misread something. OH NO I had it right the first go round. 'She titled her head on the pillow and peered over at Blake. The vision sent her over the edge. Her walls clamped down and began to spasm as she watched him lick her juices from two of Mitchell's fingers.' That scene was too HOT for t.v.! OMG!

I also loved the scene in the cafe when she meets two people she didn't even know existed. It was so cute how the old man was following her out in the alley. The story surrounding them is deep and you begin to understand why her mother is a little kooky! You don't want to miss Blake getting shot by the BB gun! Oh Lawd that was hilarious!

Can Mitch balance the band while falling in love with Alana? Will Alana leave her small town to become a part of the big city? And can she adapt to life with a musician? Find out in Blind Attraction!!!