You can UNDRESSED whenever you're ready... 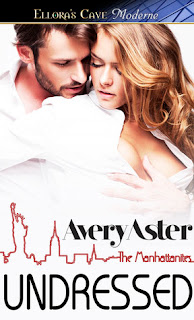 UNDRESSED (The Manhattanites #1) by Avery Aster

556 Book Chicks get Undressed:
How in the world have we slept on Avery Aster? Of course my book head cousin, LaToya, had read the book. She really needs to get a life! Ugh! Anyway so glad that I was introduced to Avery Aster and her kinky thoughts! Avery Aster is my Book-Ro (you know a book hero)! #don'tjudgeme

I freakin' love how Avery Aster gives you a run down of the major characters and places before you start reading. It was like a breath of fresh air - knowing who the characters are and how they all fit together. Kudos to Avery Aster - I am sure other authors will start using this idea.

On to the book...it unfolded like watching a movie. You can seriously picture this group of socialites living it up in the big city. And before you even think it - it was nothing like that Sex in the City crap! It was worlds better than Sex in the City!

UNDRESSED basically surrounds Lex (Alexandra Easton) and her determination to build her empire, Easton Essentials. She is trying to prepare for fashion week, but her fabrics have not arrived from Girasoli Garment Company. Lex decides to pay the Prince a visit and convince him to give her the fabrics. Lex has her work cut out for her because Prince Massimo Tittoni is attractive and uncircumcised. *Side eye - I can't believe the Prince has some extra skin* 'It would take every ounce left in her to stay focused on the Easton business at hand, not the Tittoni pleasure around her. Calm your kitty.' Expect trouble when you have to get your kitty under control. LOL!

'His attempt to tuck in the towel failed and it became loose, revealing his massive cock's shape. It was decorated with a mighty helmet head for the tip - confirmation.'

You waiting for us to get into the dirty dirty...LOL! Well believe it or not the Oscar worthy scene does not  belong to Lex and Prince. Oh no ma'am! The OMFG moment belongs to Jemma, Luigi and Rocco! This is a threesome to end all threesome you have ever read about! This scene was so HOT it will have you waking your significant other up out their sleep or going home for an afternoon delight (depends on what time of day you reading)! OMFG! 'Sounds started to pop. She was sucking him off as if her life depended on it. She was possessed. Head spinning and hair flying, she rotated her neck clockwise then counterclockwise.' Now keep in mind this is just Jemma and Luigi - Rocco has not even made his appearance yet. I'm not even gone give you a teaser from the three...READ the book! But I will say this Lex could not stop watching the scene unfold...well watching and pleasuring herself. Which made me mad at her...like really, how are you moaning louder than the participants? I was cracking up laughing when they realized she had been watching them. Then she had the nerve to be embarrassed - ugh a little to late for all that!

I have to say this...when Lex and Prince Masi do finally hook up - you want to tell her to shut the hell up! She was talking to much! Even the Prince was getting annoyed. Like lady I know its been a minute, but damn can you shut up so we can enjoy Prince Masi. I mean so you can enjoy him! Whatever - whoever - just shut the hell up! One time he even gagged her so she would be quiet! LMAO!

I will not tell you how the book plays out...but I hope you are surprised as me! I really really really enjoyed the book and I am so glad there was no freaking Cliff Hanger. But there is more of the Manhattanites to come! Book #2 is about my girl Taddy and I can't wait!