We believe in Second Chances 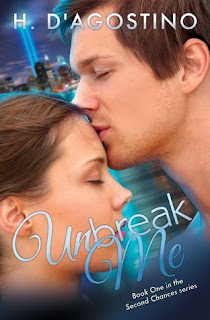 556 Book Chicks Sniff:
We are only sniffing because we believe in love and our eyes are a little watery! #don'tjudgeus

Who says you can't find love twice? Well they are sooooo wrong! Melanie and Austin find each other just when they are comfortably settled into never feeling whole again. Melanie lost her husband, Sean, in the 911 tragedy. She was still craving the love from him that she lost that morning. We loved how H. D'Agostino flashed back to happy moments with Sean. It gave us an insight on the love they shared.

But when Austin pulled up at the school that day, we forgot all about Sean. 'Melanie emerged from the car dressed in a pair of blue scrubs with her hair blowing in the breeze behind her. Austin stood frozen in place.' We loved how Austin romanced her...its been a long time since we had a man to go slow and not dominate the woman. So kudos to Austin for being a gentleman!

But don't think the mom was the only one working on a love connection, because Katie (Melanie's daughter) had her own fire brewing with Zach. 'She had that butterfly feeling in her stomach, and she kept wondering if it was the movie or his muscular arms wrapped around her that was causing the sensation. She could hear his rapid heartbeat under her cheek as it rested on his chest, and his breathing seemed to be quite ragged.' We don't want to spoil it for you...but we will say our heart broke for Zach and his family situation. This is puppy love at its finest!

Our "Say What Now" moment...when we realized that Melanie wanted to wait to have sex with Austin. And we not talking about until she got too know him better...we are talking about waiting until married sex. Ewwwwwwww...somebody pump the brake! "I was always taught that you were supposed to wait," she peaked up at him through her lashes. "I know that may seem old fashioned, but when Sean and I married, I was a virgin." Hey lady...Melanie we talking to you - who cares? Great job on being a virgin when you were with someone else, but you have this very capable man standing in front of you and you talking crazy! Oh yeah we were HOT about this...I mean great speech on setting the example for your daughter. But you kind of did that already with Sean - you pay the bills and you can get you some if you want too. And the best part is Katie doesn't even have to know! But then Ms. Virgin you steam him up and send him home to take a cold shower. Not fair to our man Austin. Not fair at all.

'He wobbled slightly on his feet as he heard her giggle. When she released him, he took the moment to move back and brace himself against the wall. Melanie tightened her grip around the base of him and moved her hand up and down while placing light kisses to him...she sank down on him until she had almost all of him in her mouth and sucked hard.'