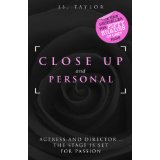 Close Up and Personal (#1 Spotlight Series) by JS Taylor

Amazon Summary: Drama-school graduate Isabella Green wants to be a script-writer. But when she meets famous director James Berkeley, she’s tempted into the glamorous world of acting.

Behind the camera, the mysterious Berkeley commands discipline at all times. But Isabella soon discovers this man's dominant tendencies also extend into the dressing room.

Suddenly Isabella is discovering a side of herself she never knew existed. But she is also learning more about the alluring James Berkeley. Is his desperate past something she can help heal? Or will the flames of passion consume them both when the cameras start rolling?

What can we say? We love Dom books!!! So of course we had to add James Berkeley to the ultimate Dom list. James is a powerful, wealthy, control freak with childhood issues. Hell he wouldn't be a Dom if he didn't have issues!

Now what is getting on our nerves are the insecure ladies they keep chasing. You are beautiful - accept it - and move on. But the questioning of every little thing and the self doubt - totally unattractive!!! OMG when she shows up for the audition and convinces herself she is not good enough - we wanted to slap some sense into her.

The insecure actress - the powerful director - of course their paths were meant to cross.

But there is no way she should have doubted James' feelings for her. He was constantly expressing his feelings for her. But she doubts everything...so prepare yourself for all her self loathing. Because it will get on your nerves!

What we are looking forward to...finding out the turmoil between James and his cousin Ben Gracey. There is definitely something brewing between them. Ben seems determined to indulge all James secrets to Isabella. James is warning Isabella to stay away from Ben and Ben is warning her to stay away from James. But we will be seeing more of Ben - since Lorna (Issy's roommate) has a thing for him.

What Rocks...the intimate times James shares with Issy. They are not all moments of sex but they are moments of passion. And its HOT PASSION!!! You will be begging for more of these scenes.

"It feels so wrong to have someone's fingers there. But the feeling is so good, I can't help myself. I rock back and forward, urging him as he begins plunging his finger in faster, back and forth."