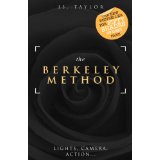 Amazon Summary: Isabella Green has landed a lead role, in James Berkeley’s latest movie. And she’s about to discover, that the famous director is runs a punishing schedule. Both on and off set.
But with their relationship still a closely guarded secret, James and Isabella are walking a tight-rope. And when jealousy and danger explode around them, can their feelings hold firm?
Book Chicks Chat:

James has only been gone 4 days and you would think its been 4 months. Issy has the whole can't eat, can't sleep without you down to a science. She was getting on our last nerves. Like he picked YOU to star in his movie and he wants to be with YOU. Soooooo Chill out!!!

We like that James isn't over the top. He is smart and he thinks before he reacts. He does not have time for foolishness. We still want to know more about the drama between him and Ben. No there is still no insight in Book# 2...but there is a new piece to the Ben puzzle and her name is Camilla. Camilla once had a crush on Ben and that didn't end well, so we are dying to know more!

We are still sitting on the fence about Lorna. Is she a real friend or not? We are leaning towards NOT, but we will wait to learn more about her before we cast our official verdict.

We loved how the book wasn't just focused on sex. Although the sex scenes are still HOT as ever. There are some new characters introduced - some we love / some we can strangle. There is also a movie stalker...this gave the book an element of suspense. Because as the reader we were dying to know how bad Natalie wanted the lead role and how far she was willing to go to get the part.

Our favorite scene: James is taking Issy to dinner and she is sporting pearls instead of underwear. And every movement is sensitive to her - the train ride, climbing the stairs, just being close to James. He stops and toys with her on the stairwell to the restaurant. It was an awesome scene!

What we are looking forward to: