If only every KNIGHT was this amazing... 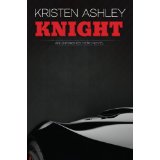 Amazon Summary: Anya Gage has learned that to get anything good in life, you have to work for it. She has no expectations, no dreams.

Then she finds herself at a party where she doesn’t want to be and she meets Knight.

Knight Sebring knows who he is, what he wants and what he likes. And he gets it. But he never expected something as sweet as Anya Gage to wander into his bedroom during a party he did not expect to be having to borrow his phone.

Knight tries to leave Anya to the life she deserves of white picket fences and a man who watches football on Sundays – good, normal and clean. But when Anya comes to his nightclub and finds herself in a situation, he knows someone has to look after her, he can’t fight it anymore and he decides that man will be him.

Knight teaches Anya that, just as with the bad, in life you should also expect the good. And he teaches her this by giving it to her.

But Knight has a dark past and just as he desires Anya for exactly who she is, he fears when she finds out exactly the man he has become and always intends to be, she’ll leave him for good, normal and clean.


This book was AWESOME! I (Tiffany) had to put the book down and ask myself…do you like controlling men? It seems like every character we fall in love with is controlling…I think Christian helped to bring out our submissive side. Anyway Knight does not take “NO” for an answer! If he tells you something you better pay close attention because he means every word spoken.
“Right, call me crazy, you could even call me a freak, I didn’t care. Evidence suggested I liked bossy.”
We all highlighted this passage because it so described how any woman would feel when Knight consumed their space. We loved that he was a different dominant. He didn’t tell her when to eat, sleep, drink, feel…he wanted her to be herself except when she was in his area.
We love Knight because he is a straight shooter! He tells you what is going on and let's you process the information. He will not lie to you! And you will be VERY VERY SURPRISED that he doesn't have your typical corporate job...and the activities that go on behind the scene of the club. But you will already be in love with Knight so it won't even matter!
You will fall in love with Vivica and Rhashan...and you will want to fight Sandrine. There is never a dull moment when Sandrine is around.
I think one of our favorite scenes was when she wanted to give him a surprise for his birthday, but he thought she was out with her drunk friend, Sandrine. He text her and tells her to get home. “Ass. Home. Now.” We were on pins and needles waiting to see what would happen next if she didn’t get her ass home. Then when she walks in 30 minutes later – we were holding our freaking breaths (Poor Benita turned blue with anticipation). LOL! And he tells her…”Right there, take your fuckin’ dress off, your panties off and leave your shoes on. Then walk you ass into my study and position on my desk, ass to the door.”
We were SCREAMING – WHATTTTTTT!!!!!! THIS KNIGHT DON’T PLAY….OMG! Then he tells her – “you do not want me to say it again.” We were screaming – Girl get in that damn study and take that punishment! If you get punished like that who the hell wouldn’t mess up every once in awhile! It was worth not calling and surprising him.
http://www.amazon.com/Knight-Unfinished-Hero-Series-ebook/dp/B007SFBPFY/ref=sr_1_1?s=digital-text&ie=UTF8&qid=1370645151&sr=1-1&keywords=knight