Love Staring you in the face 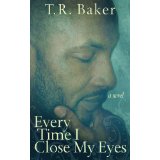 Every Time I Close My Eyes by T.R. Baker

Amazon Summary: When newly divorced Shelby Simone meets handsome, talented Jules Brishard, an up and coming neo soul artist, a whirlwind romance develops. It’s quickly put to the test by a vow taken by Shelby to remain celibate until she’s remarried. Former lovers and emotional demons soon emerge and attempt to further disrupt their beautiful music together. Are good intentions, lavish gifts, and a creative imagination enough to save this spontaneous love affair? Jules and Shelby both begin to wonder, “Is this really the love I imagine Every Time I Close My Eyes?”

Chat with the Chicks:
It's a story of learning...learning how to love yourself, learning to trust, and learning how to love again. Many of us have been in relationships or marriages that didn't end the way we planned, but we had to find a way to pick up and move on. That's what we liked about this book - it's about starting over and rediscovering yourself.

But in true woman fashion we were secretly waiting for the other shoe to drop...meaning we thought Julian would mess up! We were waiting for Julian to mess up, for his skeletons to leap out the closet, for his groupies to make him weak, etc...etc. But in the end we ended up loving Julian and wanting to tell Shelby to kick rocks!

Favorite Character: Hands down Smokie (he was like the Chris Tucker, Smokie, in the movie Friday). He was funny, obnoxious, and down right rude at times. But he was a great friend to Julian and later to Shelby (once she understood his motives).

What made us mad: Shelby constantly walking out of Julian's life. Who does that? No sister we know!!! We thought she should have stayed and handled their situations (especially one in particular) like a grown woman instead of running for days, weeks, months...ugh!

What we could do without: the system overload of details. Like what time it is...what day...what you did to prepare for bed...it was a lot of extra details that were not needed.

What we are looking forward to: More from Author T.R. Baker...we are expecting her to break out of her comfort zone and give us more drama and steamy bedroom scenes with Julian and Shelby. Kudos to Author T.R. Baker on her break out novel.