He keeps WALKING into our lives... 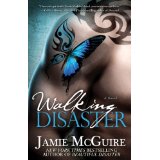 Amazon Summary:
Can you love someone too much? Travis Maddox learned two things from his mother before she died: Love hard. Fight harder. In Walking Disaster, the life of Travis is full of fast women, underground gambling, and violence. But just when he thinks he is invincible, Abby Abernathy brings him to his knees. Every story has two sides. In Beautiful Disaster, Abby had her say. Now it’s time to see the story through Travis’s eyes.

Book Chicks Chat:
Truthfully, I (Tiffany) had no intentions of buying this book. I admit I was tempted to purchase it several times throughout the week (mainly because the cover was so incredibly sexy). I was already in love with Travis from 'Beautiful Disaster,' so why read this same story from his POV? Then my work phone rings...and it's Benita...

Me: "What are you reading?"

Benita: "Oh no, it has some different stuff we didn't read before - like about his mom."

Benita: "It's really good...better than I thought!"

So of course I log on to Amazon and 1-click 'Walking Disaster' and the Travis mania begins!!!!

First we learned how he came up with the nickname Pigeon:
"I decided a long time ago I would feed on the vultures until a dove came along. A pigeon. The kind of soul that didn't impede on anyone; just walked around worrying about its own business, trying to get through life without pulling everyone else down with its own needs and selfish habits. Brave. A communicator. Intelligent. Beautiful. Soft-spoken. A creature that mates for life. Unattainable until she has a reason to trust you."

He knew she was the "one" and that is what made him give her that name. And it made us love him even more. He saw her for who she really was not who she was trying to invent herself into. Just hearing (okay reading) the way he loved her from his POV would make any girl weak.

Yes, it is basically the same story - but it is oh so damn different!!! And we might just love it more than the original (#dontjudgeus). You get an insight into his relationship with his father and brothers. You get to hear (okay read) his mother's dying wish, which helps you understand why Travis is a fighter...and why he fights so hard to prove his love to Abby.

So I (Tiffany) am reading in the barbershop (while my boys get a haircut) and I get to the damn Thanksgiving dinner. We never knew (from the original story) that he went back to his dad's house after dropping Abby off at home. We also didn't know that Trenton (his brother) knew that him and Abby were already broke up. So he gets back to his dad's house and Trenton has already told everyone about the break-up.

"I collapsed to my knees, and my brothers surrounded me, placing their hands on my head and shoulders for support."

So now I am looking around the barbershop to make sure no one sees me crying. Yes, I was freaking crying...don't judge me! So of course I text Benita and she starts laughing at me...and I'm like this is no laughing matter.

Another plus...the book takes you 11 years later into the life of Travis and Abby. And of course we all love to know if our favorite characters are still together. But we won't spoil the book for you...but we have to say there is a new lady in Travis' life. Her name is Jessica and she is kicking ass and taking notes for later.

"Even though we'd put each other through hell, we'd found heaven."