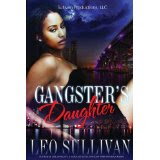 Bravo to Author Leo Sullivan and his new release the Gangster's Daughter! This book was not your typical street fiction...where you know what's going to happen by the middle of the book. Leo does a great job keeping you in suspense up until you see "To be Continued..."

We liked Kadisha because even though she was spoiled, she was also smart. She wasn't a character that was wrapped up in the name her dad had made for himself in the street...she was humble. Her mother ran off when she was 10 years old and she took over the responsibility of caring for her younger sister Keona and little brother Ike Jr. She didn't want to be a part of the street lifestyle she was on her way to college to one day take over the family business.

When someone close to the family sets up her father, Ike Spenser aka Monster, her whole life changes in a blink of an eye. Kadisha survives the attack, but everyone becomes a suspect for the crime that took apart her family. We like how Leo tells the story from several different POV's (Point of Views). Like the dad's best friend, Big Bee POV or hearing Mellow's POV switches the scenes in the book. Just when you think you can't trust this character, you read their POV and you think well dam it's not them...so who is it? And that suspect is pointing the finger at the next person...and then you read their POV and don't think it could be them either.