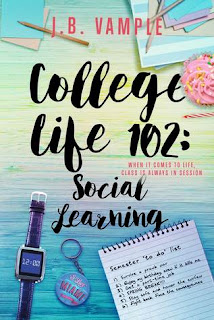 The second book is even better than the first! Chasity is still mean as ever, but she loves her circle of friends (even if she won't admit it). Malajia is still special as hell. Emily still letting her mom control her. Alex is still trying to mother hen everybody. But Sidra! Oh we get to see a different side to her this semester. She may be prissy and proper, but she will put them paws on you if necessary! That whole fight scene and the girls ending up in campus jail..was just like what!!!! Did this really just happen?

The whole prank war - boys vs girls - was absolutely hilarious! The stupid stuff they were doing, I was like settle down children! But the rolling on the floor moment for me..was the weekend at Malajia's house. I think I read this part over and over again, it was so darn funny! So they are all staying the weekend with Malajia as a part of the get to know your friends better routine. Anyway they decide to play Hide-N-Seek in the dark at 2 am. OMG I was crying laughing when Mark and Malajia broke up all her parents stuff and her dad started going off on them. I was literally in tears laughing!!!

You get to know the crew a little better this semester. I like how they rallied together when they were all faced with a difficult school evaluation. So I am waiting to see what the deal is with Alex's ex and this so called friend from back home. There is something definitely shady going on with this situation. And I am dying to know who is rooming together next semester! I am so wrapped up in their lives...waiting on book 3 is torture!