Power Comes With A Price 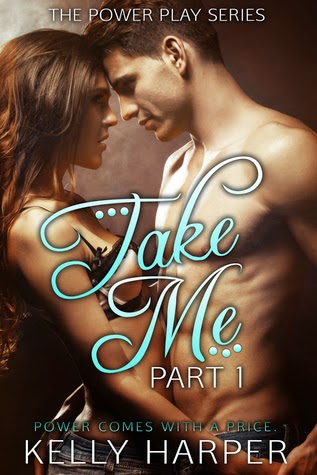 Take Me (Part 1) by Kelly Harper

556 Book Chicks got sucked right in...
Once again I have become a victim of a serial. I know I said I would not fall prey to another damn serial. But Take Me just fell in my lap and I couldn't resist it. Only great sex can make you late for your first day on the job, have you christening your new office, and taking an important time out before a big meeting. And all this happened within 24 hours!!! Now that was some good stuff.

Two Alpha Males...we hit the jackpot with these two Alpha Males - Declan and Isaac. Both successful in their own right and both wanting to mark their territory with Hannah. Declan a long time friend of the family, that has played it safe with Hannah for far too long. She takes his over protective behavior as "big brother," which sucks for Declan because Isaac is ready to pounce on his property, Isaac has turned Hannah's world on it's axis. And every time she tries to escape him, he finds his way back to her.

So I am totally Team...Isaac! For right now anyway. Issac is going to allow Hannah to be carefree and spontaneous. 'When his eyes reconnect with mine it's like we've been transported to another place. The rest of the world fades away as he pulls up the sides of my dress. I've never done anything like this before, out in public for anyone to see, It's as though the animal in him is awakening the animal within me.' Isaac Drake is not playing fair, he is willing to pull out all the tricks to claim Hannah. #TeamIsaac

I am so looking forward to part II. I have to know if Hannah will surrender to Isaac? Will Declan finally make a play for Hannah? Will Hannah have to choose between them? I am excited just thinking about what could happen next!