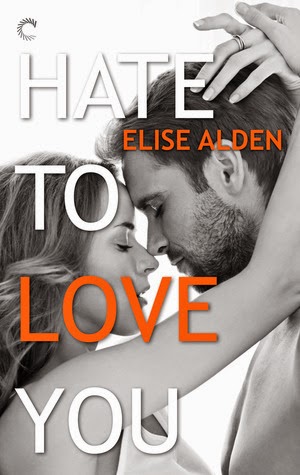 Hate To Love You by Elise Alden

556 Book Chicks struggled with rating this book...
I really wanted to read this book...the synopsis had me like ready to really read this book. Then I read it and I am not sure if it was missing something or if it had too much of something. I can't call it so it left me confused.

Don't get me wrong there are really good parts in the book. Like the dynamic between Paisley and her sister Caroline. Caroline was a bitch! And although Paisley was wrong for sleeping with Caroline's soon the be husband James, Caroline got exactly what she deserved. Paisley, on the other hand, I liked immediately. She was loud, adventurous, and played by her own rules.

Normally we book boyfriend the guy quick...but not so much with James. James and Paisley had this undeniable connection - they could communicate without talking. 'He had not shot a mental comment at me, had he? Nobody I'd met could do that, see what I was thinking and answer back. James turned away, leaving me to bite my lip in confusion.' James was a coward to me. I actually hated him even when he made things right, I still hated him. And I refuse to believe that he did not know that was Paisley in bed with him. I don't care how drunk, how dark - he knew that was Paisley. And to me that made him more of a coward. He wanted Paisley from the moment he saw her, but he was too much of a little bitch to admit it. And for that James does not get to be a book boyfriend.

I really did enjoy the story, I just wasn't engrossed it. And I can't dive into it and pick it apart without giving away too much of the story. I think I was just pissed off that no matter what Paisley did she could not buy a break. And then when I found out why Caroline had been a bitch to her all those years, I was really pissed off. Good thing is there is no cliff-hanger, so you do get to see how the story works out between Caroline and James, James and Paisley, and even Paisley and Caroline.