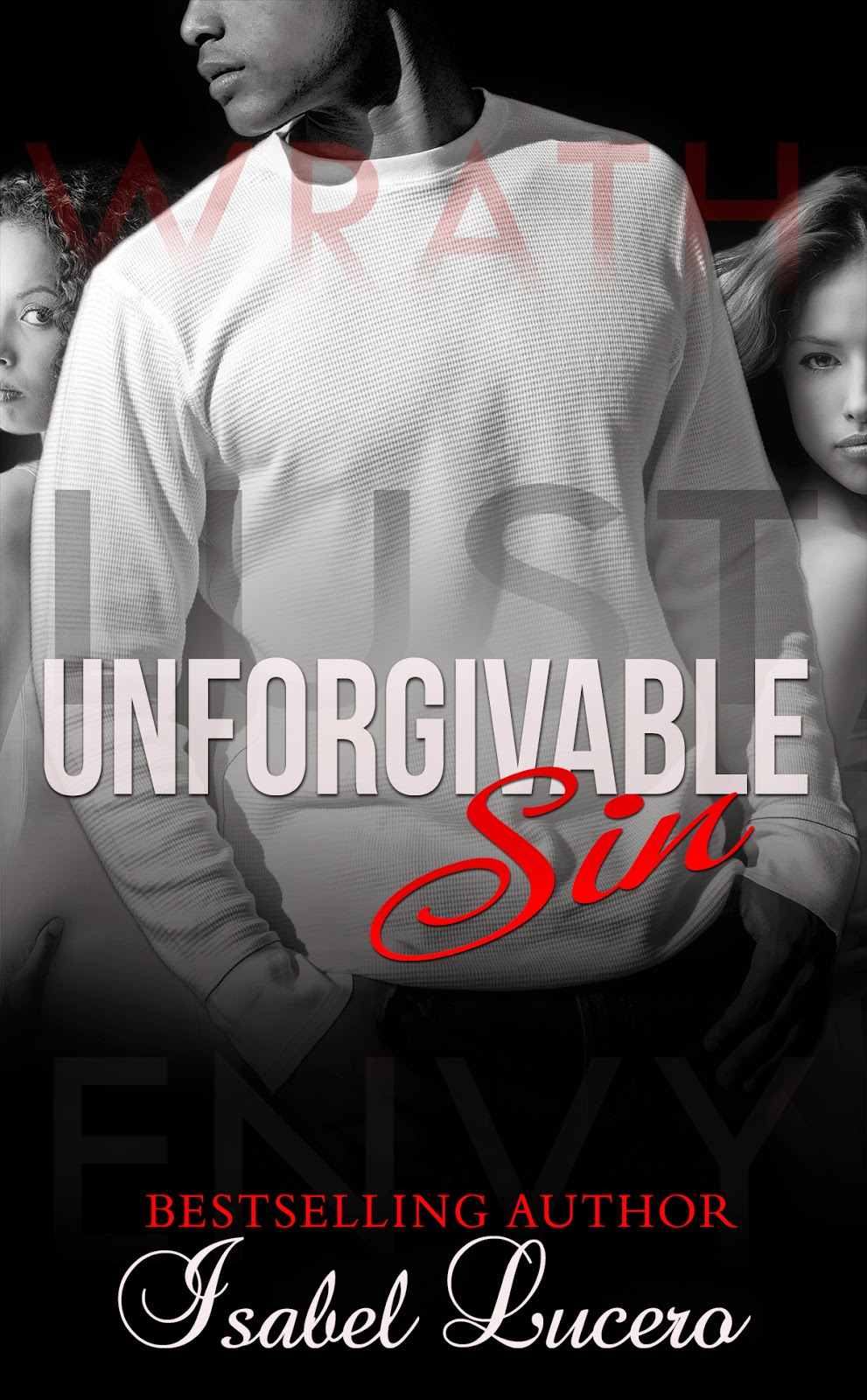 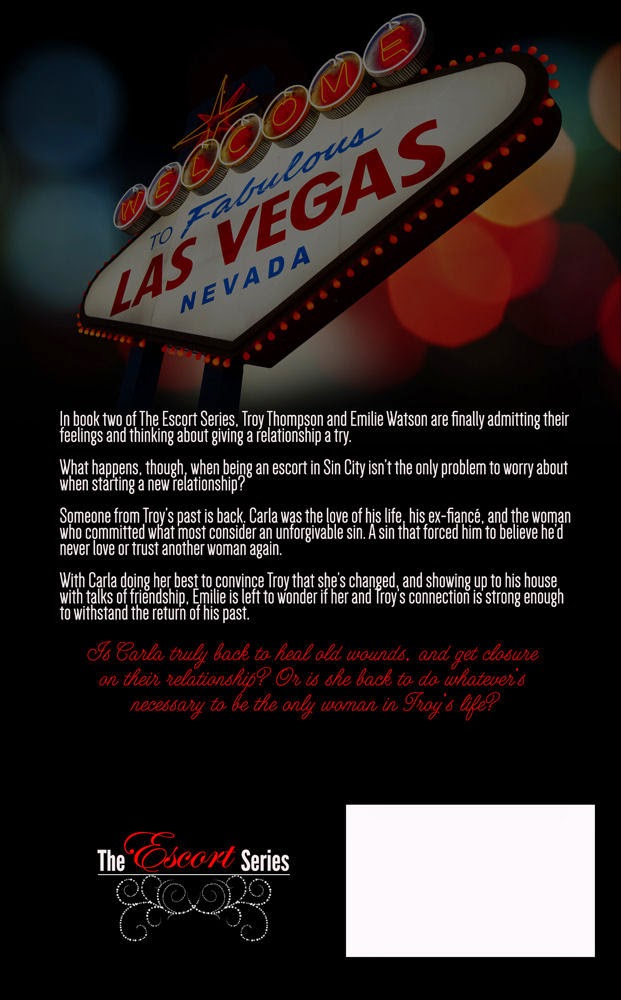 Synopsis
In book two of The Escort Series, Troy Thompson and Emilie Watson are finally admitting their feelings and thinking about giving a relationship a try.

What happens, though, when being an escort in Sin City isn’t the only problem to worry about when starting a new relationship?

Someone from Troy’s past is back. Carla was the love of his life, his ex-fiancé, and the woman who committed what most consider an unforgivable sin. A sin that forced him to believe he’d never love or trust another woman again.

With Carla doing her best to convince Troy that she’s changed, and showing up to his house with talks of friendship, Emilie is left to wonder if her and Troy’s connection is strong enough to withstand the return of his past.

Is Carla truly back to heal old wounds, and get closure on their relationship? Or is she back to do whatever’s necessary to be the only woman in Troy’s life? 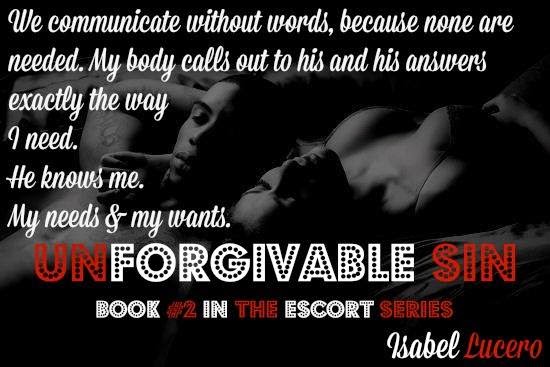 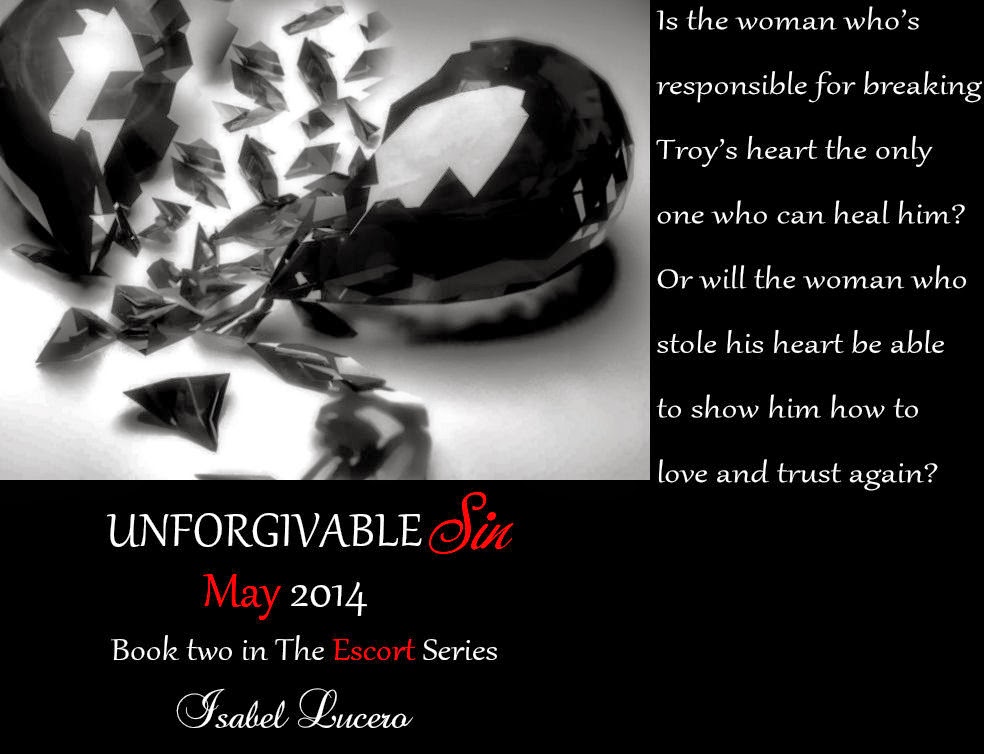 Excerpt #1
“You’ve been teasing me all night. I think it’s time to return the favor.”
Once I’ve put the condom on, I get on my knees in between her legs, and slowly let the tip of my dick slide through the lips of her pussy. I rub myself over her clit and back down towards her entrance. I push the head of my cock in just a fraction, eliciting a moan from her throat, and pull back out.
“Troy!” she grunts in frustration.
She reaches forward, trying to pull me into her.
“No,” I growl, pulling away completely. “You don’t get to touch me now. It’s my turn to touch you.”
She doesn’t argue, she just lies back down and watches me as I put my face in between her thighs. I slowly kiss around her pussy, letting my tongue graze across her skin gently. She moans and tries shifting herself to my mouth which makes me kiss down her inner thigh instead.
I look up and see that her eyes are squeezed closed, and her hands are gripping the sides of the couch. My tongue moves across her skin leisurely until reaching her wet center. When my tongue touches her pussy, her hands go to my head.
She cries out in satisfaction. “Oh, yes! Yes! Please don’t stop.”
I eat her pussy like it’s the last time I’ll ever have her on my tongue. I suck her clit into my mouth, and then dip my tongue into her entrance. I taste how wet she is for me, and my dick throbs, wanting to be deep inside of her.

Excerpt #2
She’s not okay with you having friends?” She wipes the tears from her cheeks.
“Don’t be ridiculous. I can have friends, but you and I have a history, and she wouldn’t be okay with us hanging out.”
She looks down at her hands again. “So there’s no way for us to be in each other’s lives? Not as a couple and not even as friends?” Carla looks back up at me, tears brimming in her eyes. “I can accept us never being a couple again, Troy. I know I messed up, and I’ll live with that mistake for the rest of my life. I just need a friend. You’re all I have, and just knowing that I have you to talk to from time to time is all I want. I don’t want to cause problems in your life; I just want the chance to be in it in some small way.” She pauses and takes a breath. “I know you don’t want to hear this, Troy, but I still love you. You will always have a piece of my heart, and I’ll always know you were the one who got away.”
As I stand there in shock at her declaration of love for me, she stands up with her purse and moves past me, moving towards the front door. When she reaches it, she pauses again before looking over her shoulder at me.
“Bye, Troy,” she says softly as a tear trickles down her face.

Purchase Living in Sin - Book one of The Escort Series 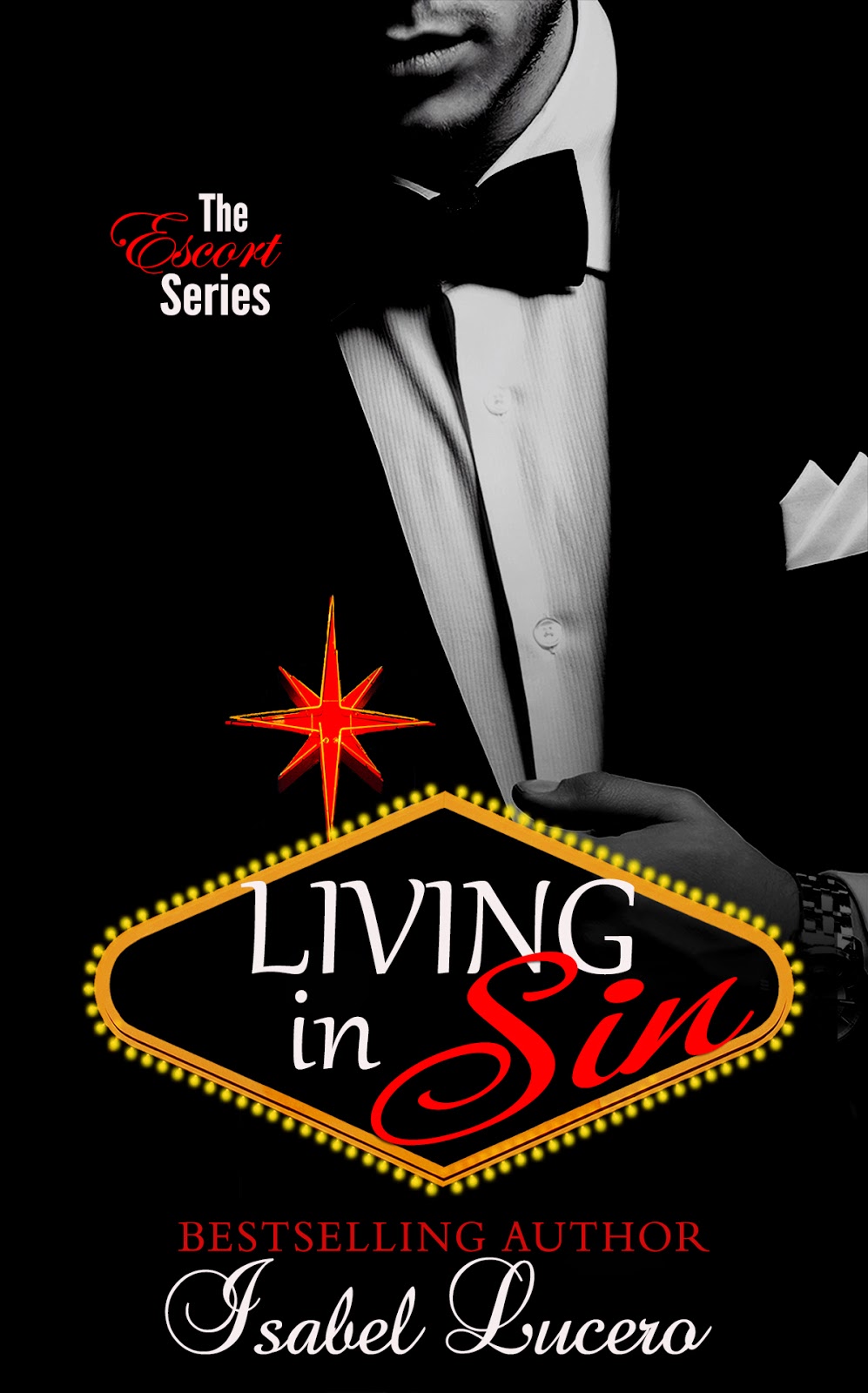 Synopsis
Jace Jamison is every woman’s fantasy. He’s a mysterious businessman willing to sweep you off your feet, a tattooed bad boy from the wrong side of the tracks, and a sexy friend you want to take that next step with. Jace is everything and anything you want him to be. He’s a highly paid escort. But nobody knows who Jace really is; the man whose dad abandoned him, whose brother was killed, and who had to take care of his mom at a young age. At the age of nineteen, he was living in Sin City, ready for a life away from stress and struggle. Adrienne has been having a sexual drought since she broke up with her boyfriend. Even then she wasn’t getting fully satisfied. Being an event planner, she’s constantly working at numerous events. Several times she’s seen a man she can only refer to as the God-like creature at her work functions. He’s devastatingly handsome, tall, and has beautiful eyes, but he’s always with a different woman. The last thing she needs is another player in her life. After a few chance encounters with Jace, her best friend convinces her to just get some good sex out of him and not worry about who she’s seen him with. But what happens when she finds out that he isn’t dating these women because he wants to, but because he’s paid to? Keeping his job a secret from Adrienne seems easy at first, but when she begins meeting people he knows in his escort life, and they begin getting closer, he knows he has to tell her before someone else does. When their worlds entwine, and confessions are made, will they be able to work through it? Will she be able to push aside his sins and focus on the good in him? Will Jace get what he’s never had? A woman who wants him despite what he’s done. Or will living in sin cost him what he never knew he wanted? 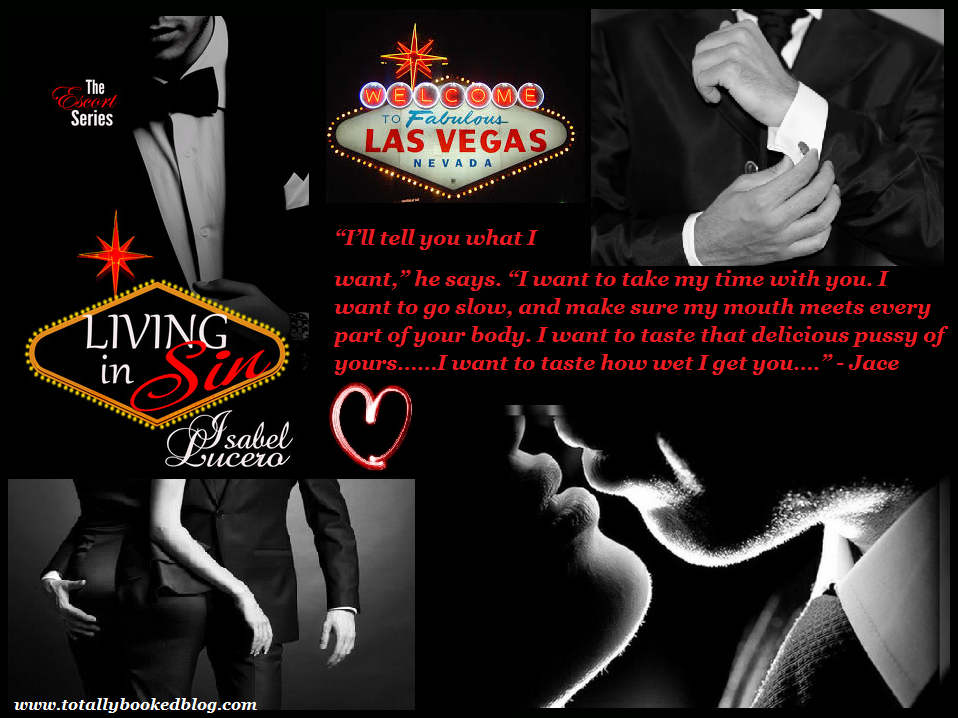 About the Author:
Isabel Lucero is the author of The Secrets That We Keep and the Amazon bestseller, Living in Sin. She was born in a small town in New Mexico and was lucky enough to escape and travel the world thanks to her husband's career in the Air Force. She's been married for ten years to the love of her life and Jr. High School sweetheart. Her husband is author W.S. Greer and together they have two of the best and most beautiful kids in the world.

Isabel's love for reading is anything but new, she's been reading since before she was a teenager. She started reading books by Mary Higgins Clark and James Patterson before being catapulted into the indie author world thanks to a little somebody named E.L. James.

She currently lives overseas and is working on book three of The Escort Series. Isabel loves connecting with her readers and fans of books in general. You can find her on Facebook, Twitter, and Instagram