This book is oh so Wicked... 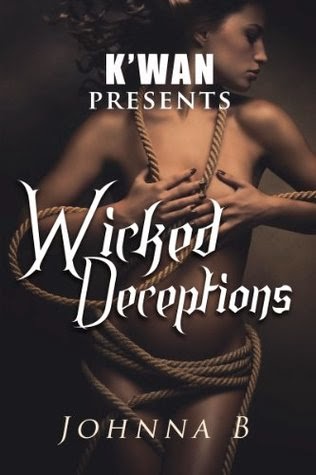 Wicked Deceptions by Johnna B

556 Book Chicks loves wicked...
Hands down one of the best stories you will read in 2014. Johnna B got down with this book..I mean she got down!!! The best crossover novel for 2014...you don't have to be a specific race or gender to understand how GREAT this book is!

I don't know where Johnna found this crazy B, Courtnie, but I am glad she let that nut out to play! Because Courtnie takes you on the ride of your life in Wicked Deceptions.

What I liked about this book...I could not figure out what was going to happen next. The minute I thought I had the story figured out - the next minute the book took a turn and left me with my mouth hanging open. Like really? Really? I am talking from the first chapter to the very last sentence of the book, you will be like what institution did Johnna find this damn Courtnie in. I totally was not expecting Courtnie to be a crazy ass white girl. 'She flung her blonde hair over her right shoulder and showed off her smooth, tanned skin. Her ocean blue eyes stared deep into his eyes, making him feel naked. Adonis didn't really go for white girls, but she was fine. She had a body that could give most sisters a run for their money.' Expect the unexpected throughout the entire book...don't blink...don't breathe...don't go to the bathroom...don't do NOTHING!

Who I wanted to slap...Angela (Adonis' wife). First off she was just as crazy as Courtnie, just in a different way. How you constantly accusing your man of having another woman when you have no proof? She basically handed him over to Courtnie wrapped in a Xmas bow. She did so many dumb things in this book, I hated her more than Courtnie. First off you accuse your loving husband of cheating, then you leave him and take your children, then you befriend the woman that has been checking him out. I can't even tell you what else this dumb broad did...but bayyybeee when you read it I want you to leave me a comment. I was floored when that shit happened.

My favorite part...so Angela is living with her sister and trying to take her anger out on her sister. But bayyybeee that sister gets her right together and I was snapping my fingers and rolling my eyes...like what! LOL! "He's all yours, huh?" She chuckled. Let's see how long that holds true being that your simple ass has given him his freedom papers. As fine as Adonis is, some lonely bitch is gonna be on him like a dog on a bone. I hope whoever comes across the man you so carelessly abandoned sucks his dick so good that he forgets all about you. Then we can be lonely bitches together." Now that's how you put a bitch in her place.

But the sex scenes though...the sex scenes are HOTTTTT! This Courtnie may be crazy but she was putting it down in this book. Male, female, white, black...Courtnie did not discriminate. LOL! 'Courtnie hungrily unzipped his slacks and stuffed his cock in her mouth. When she took him into her throat, she heard Dr. Himfield moan. She did something with her tongue that should be outlawed in forty-nine states, and it nearly brought him to his knees.' But wait Courtnie is not finished!!! 'She couldn't believe the way Courtnie was making her body feel. Every time Courtnie's hands touched her, she felt tingles in that same spot.' I am telling you Courtnie was putting it down in this book!

I don't know what I was expecting from Johnna B, but Lawd knows this was more than I ever imagined. First off let me say this was my first time ever reading Johnna B, but afterwards I was trying to see what else I could 1-click from her. She is talented beyond words...I mean I was biting my nails, my leg was bouncing...just read the book you will see what I'm talking about.

Email ThisBlogThis!Share to TwitterShare to FacebookShare to Pinterest
Labels: Johnna B