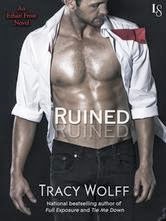 Ethan and Chloe will definitely light a fire in you! This book is compared with 50 Shades of Grey and Bared To You. I don't see that, it's a different book style that marks its own way. I really loved the story line of this book. Tracy has set the bar on this one!

Ruined is an emotional read from beginning to end. It will have you laughing and crying and just all torn up. It is a nail biting, thumb sucking, talking to yourself with a "say what now" kind of read that has you holding on page after page!! I love it!

Chloe has received a summer internship with one of the top Industries, Frost Industries. She is on her way to being a Lawyer that specialize in Intellectual Property Law, her dream job. Her first day she get's a tour of the grounds and Chloe is taken with the staff's cafeteria. Too nervous to have a big breakfast before a mandatory meeting with her boss she decides on a smoothie. Sounds easy enough, but it proves to be an enormous problem for Chloe! LOL! The juice guy, as Chloe calls him, refused to mix the smoothie that she asked for and tried to force a special of the day on her that he said was better for her. So ensues the battle of the smoothies!  The two of them gave us laughter with how they kept going back and forth about which smoothie was tastier or healthier and both were unwilling to budge. That is until Chloe's stomach starts to growl and touches something in "the juice guy" and he makes her the smoothie she asked for at first. During the smoothie fight she is unaware of the true identity of the "juice guy"!

I like to win. It’s kind of an obsession with me, so I should be happy that he backed down so unexpectedly. Except I’m not, because winning like this feels strangely like losing. Which means we’re at a stalemate. Him insisting I try something new. Me insisting I’m fine with the tried and true. It’s a stupid fight to have, especially with a stranger, but the look in his eyes can’t be denied. We both know there’s more going on here than a battle over a stupid drink.

It's not until later that she finds out the "juice guy" is actually Ethan Frost, the CEO of Frost Industries. That begins the chase! Ethan knew from the first encounter that he wanted her, and he was determined to get her. Going after Chloe made it very hard for her around the company for more than one reason. She was an intern like the others she worked with daily. Because he was personally interested in Chloe (and didn't know who knew) it seemed to them like he was giving her special attention and allowing her privileges that they weren't getting. None of that was true but the others didn't know that. Chloe fought hard to maintain a professional relationship with Mr. Frost, going as far as to continually return an expensive blender he had sent to her home after the smoothie event, because she thought it inappropriate for her to except a gift from him as an intern. His constant attention in the cafeteria and office made it very uncomfortable for her with her peers. People in general could be very mean and the other interns showed her at every turn just how they felt. Chloe tried to resist Ethan and keep it professional but he was not having it. Ethan came in her life and showed her a kindness and love that she had never known. She had lived through a tragic incident that changed her life. Everyday she was taking her life back one day at a time. Then came Ethan and he began to melt the walls she had around her heart!

It’s there in the air between us. In the look on his face and the conviction in his voice. In the way his thumb brushes against my inner elbow with whisper-soft strokes. In the way he angles his body so that he’s on the outside, shielding me, protecting me from I don’t know what. And it’s there in the butterflies in my stomach, the electric sparks racing from one nerve ending to the other. I’m shocked by how much I want to say yes.

She was living with her issues from her past and trying to deal with them. Chloe's demons were as present as ever. Ethan had his own issues and demons but you didn't get to know that until we learn about his family much later in the book. He seemed like he could be the anchor Chloe needed to get through each day. The way he was drawn to her and she to him gave her a comfort she needed at this time in her life. She had never given another man permission to be this intimate with her. Never had she let anyone in her heart like Ethan.

His thumb presses against my clit, circles, and I know I’m not going to do anything at all unless it involves this man touching me, wanting me. “God, Chloe, you feel so good,” he tells me, his voice as dark and smooth and seductive as the chocolate bar I keep at the bottom of my purse in case of emergencies.

Ethan knows that there is a reason Chloe has walls around her. He also knows that he will be there for her whenever she is ready to let him in. After a few accidental meetings out socially she begins to slowly let him in more. Finally she accepts his invitations for lunches or dinners and just spending time with him. She stops caring about hiding her being with him. Let them talk! It is some of the happiest times for her.

She forgets to be afraid and starts to trust Ethan. She opens up and tells him all of her secrets. He holds her and tells her everything she needs to hear. She holds on to him for life! Something seems wrong, but Ethan can't put it together, or does he?  Ethan has a business meeting coming up and has to be out of town for a few days. Before he returns home he is a changed man! About his life and about Chloe! What the Hell happened?

The last part of this book will have you cussing and making a fist with a I just be Damn!!! Will Chloe and Ethan make it through this? I wouldn't bet on it, but I hope so!! Woooweee!