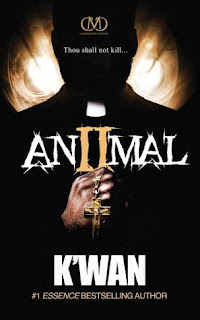 556 Book Chicks were holding their damn breath...
Let's just get straight to the point...K'wan brought the unexpected in Animal II. He made us second guess all the scenarios we had conjured up in our head. He totally had us going to the left while he was busy ramming the story straight down our throats. Hands down one of the best novels we have read in 2013.

So coming into this book, I was definitely #TeamGucci and #Team Porsha, but Animal II changed my opinion of them...UGH! I came to the conclusion that our 556 Book Chicks friend Lawrence may have a point...they not made for this life. Gucci got the duck mouth because Animal slept with Red Sonja while he was a fugitive for 2 plus years...really? How about you jump out the window with your friend, Gucci. And then Porsha on Zo-pound ass like they been together some years. A street man cannot hold down a nagging woman and survive in the streets - she will get you killed. The only thing I can give props to Porsha for was convincing Zo to leave his gun at her house that night...other than that she gets no respect from me. And I'm sorry Gucci might have earned a body or two in this book, but she almost let everyone die before she pulled the damn trigger. So I want her and Porsha to exit stage right. But Frankie's Angel can stick around...maybe her and Zo can hook up later! What??? Don't hate the game...if you a fan of K'wan's you already know anything and everything is possible.

But I have to say when Gucci told Animal his ass had been on vacation "swimming in ho soup," I was dying laughing. "Ho soup" really K'wan? LOL!

Ohhhhhh and K'wan finally let Swann's secret out the bag. And Lord knows everything he has you thinking up until the secret is finally released will be oh so very WRONG! I thought for sure Swann was playing...nevermind it don't matter anyway what I thought because it was WRONG!

I absolutely loved the story line written for Animal, Ashanti, Kahllah aka Black Lotus, and Zo-Pound! Just when you think they were down for the count...K'wan dropped kicked someone and kept the ball moving forward. I am preparing you to expect the unexpected...do not blink, sleep or breathe while reading Animal II.

But I am real curious how K'wan is going to bring up the status of King James. Because to me King James did not prove under no certain terms that he was boss material. And Lakim had a valid point that Ashanti was stepping up more like a boss and making decisions for them. Lakim was throwing serious shade on Ashanti throughout the book. And although I hate to say it Ashanti might have to put a bullet in Lakim sooner rather than later...just wait you will see.

And Monika and I were discussing how K'wan got down on the sex scenes in this book! OMG!!!! K'wan damn near had a side story of erotica in Animal II. That scene with Zo and Porsha in the tub - had me looking back at the book cover trying to remember what the hell I was reading. 'Porsha placed one leg on the side of the tub so that Zo could get a better angle and drove her pelvis into his face. When she came, her legs shook, and she feared that she might fall, but Zo's powerful grip on her waist steadied her while he continued to lap at her.'

WAIT...WAIT...WAIT...just when you get to the epilogue and you think everyone is on their HEA...there is a knock at the door. And it is the knock to end all knocks! Gucci don't answer that door girl...don't do it!

Please believe K'wan put it down in this book. He gave you everything you were looking for...plus things you didn't even ask for. K'wan brings the heat in novel after novel...and we can't applaud him enough.