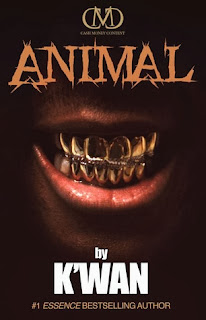 556 Book Chicks go underground with Animal...
With K'wan releasing Animal II: The Omen last week, I knew I had to pay Animal a visit and refresh my memory. I promise I read Animal at least twice a year ago, but reading it again over the weekend was like reading it for the first damn time. I was holding my breath, biting my nails...like I had never read the book. Ugh! All I could say is this damn K'wan is a freaking brilliant Author...with his tasteless ass! LOL!

There are so many things I loved about this book...I don't even know where to begin. Well let me say this I always tell folks to read the 'HoodRat Series' before diving head first into Animal, because a lot of the characters had their first appearance in one of the Hoodrat books.

Anywho...Animal had just escaped prison and was living life as a fugitive...until his girl Gucci was shot. Now he is making his way back to Harlem to get revenge..."I respect your faith in the higher power, but I'm gonna put my faith in firepower." Please believe the streets were not ready for Animal to be resurrected from the dead. But while Animal was away, Ashanti already had the streets rocking from his havoc. "Niggaz know how I give it up; give me mine or pose for that white line." Now with them both on a death mission - no one in Harlem is safe!!! Oh wait...did I fail to mention Alonzo AKA Zo-Pound is back from playing square and he is handling business in the streets.

I have to tell you Zo-Pound is one of my favorite men...he can be trusted, he can be GQ and street at the same time, and he is calm in sticky situations. One of my favorite scenes was when Zo was on a date with Veronica and he ran into Porsha...and the next thing you know he was defending her (Porsha's) honor against that bastard Don B. 'Don B. had no idea he had even been hit until he staggered backward and bumped his pack against the corner of the booth where Frankie and her girls were sitting. The second slap was even more vicious that the first, lifting Don B. off his feet and sending him sprawling onto the table between Porsha and Dena. where Dena's drink accidentally spilled on his head.' But that was not the best part...I just wanted to share that Zo knocked the hell out of Don B. Now on to the good part...so Tone (Don B. right hand man) thinks he is going to back his dude up...NOT! "Tone, I'll bet you all the money in your pocket that I can knock this li'l nigga out his shoes and still peel yo cap before you clear that gun. If you draw, nigga, you better be Picasso," Alonzo warned. Tone wisely dropped his hands to his sides. Whhhoooooooooooooo Bayyybbbbbbeeeee I can read this part a hundred times and still be laughing! LOL!

This book has it ALL - street wars, lines being crossed and drawn, new loves and lovers being reunited. I could talk about Animal forever, but I don't want to ruin it for those of you who haven't read it yet. I don't know what you're waiting on...read the damn book already! But I will sum it for you...oh wait I can't their are so many players that make this book what it is...Dena, Frankie, Cutty, Swann, Shai, Nickels, Holiday...the list goes on and on. But bayybbeeee when you meet the Priest - Church will be O-U-T - OUT!

Kudos to K'wan for being so talented with a pen. He definitely has a gift and we thank him for sharing it with us. #Tasteless