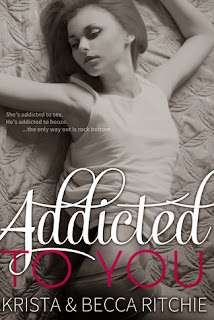 Addicted To You by Krista & Becca Ritchie

556 Book Chicks need therapy...
OMG this book was too much for one person to handle. I mean OMG like it was addiction in overkill in the worst way.

Lily Calloway and Loren "Lo" Hale both come from well respected families and money lots and lots of money. Lily and Lo have committed themselves to this fake relationship to cover up their addictions from their families. They devote so much of their time to their addiction and lies that they become separated from the real world. They have no friends, barely making it to class, and hardly ever spend time with their families. They are both a HOT mess.

Lily Calloway is addicted to sex. And trust me we love a good sex book over here at 556 but damn - she took it to a whole new level. 'When we were eighteen, he asked me what it felt like to go without climaxing for a day, and I told him it feels like someone is burying my head under the sand and pulling my limbs so tight they become rubber bands, waiting to be snapped and released. The cravings feel like drowning and being lit on fire at the same time.' While Lily is off having sex, Lo is pouring himself a glass of the good stuff. Unlike Lily, Lo is a functional alcoholic. He does some stupid stuff, but the main problem is her.

Yes, the book has some good moments...some were funny and some were life changing...so why give it only 3 stars? The addictions were overkill!!! Like damn did they have to struggle with their addictions through the whole freaking book. There were times when I thought the book was going to turn around...like when they finally decided to be in a real relationship instead of the "fake" one or when they actually gained two real friends. I was like okay they are finally going to stop this bull and get on to living, but that didn't happen. To me the addictions took over the actual twists and turns of the book - like when Lo discovers who Ryke really is or when Rose and Connor start dating. I am not saying it wasn't a good book - its just in my opinion the addictions were too much. I found myself constantly checking to see how much book I had left to read. But I have to say I would read book #2 just to see what happens next.