A Collection of Poetry 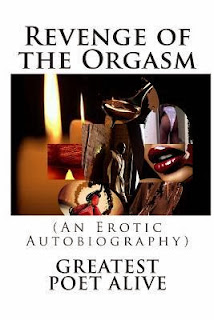 Revenge of the Orgasm by Greatest Poet Alive

556 Book Chicks Monika gets in her feelings...
Poetry With Emotion is exactly what Author G.P.A. gives you in this book of poetry. I must tell you I was surprised when I started to read a couple of the poems that it kept my interest! I'm a book reader - meaning I need a story line(good or bad)! But here's the thing..... these poems were mini stories!

There were a lot of moments when a lot of things mentioned, said or eluded to were so familiar to me. Who hasn't "Obsessed" over someone? You haven't looked at pictures on your phone or computer and it immediately made you think about them? Made your passwords or combinations from their initials, birthday and measurements... Yeah I know I'm not the only one..LOL.

I closed my eyes after I read "Chocolate, Powdered Sugar, and Strawberries" and I could smell the chocolate syrup, taste red strawberries. Then I read "Enough" and I was in that damn taxi..thank you so much and I mean that!!

Obelisk found freedom because she had pulled zipper down  enough
Nowhere near a granite state, still brown skin turned purplish white vein protruded
prominently, so I was hard  enough
Not on her knees, yet she was able to inhale and exhale, descend and ascend upon my appendage
showing she had room   enough
Apex arrival had not yet, but eyes saw back, top, and front of brain, breath became scarce, and
tumescence began to make his appearance, signaling that I was close  enough


Buy this book of poems and enjoy the ride!