Will this be the last breath... 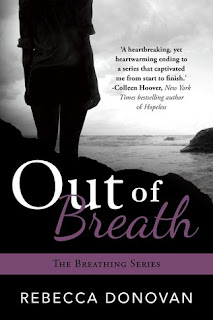 Out of Breath by Rebecca Donovan

556 Book Chicks exhales:
It seems like it has been forever since we read books 1 and 2 of The Breathing Series. So of course there was no 1-clicking for us on release day – we had already pre-ordered the book.

If you remember…Emma had left Evan beat up and hurting on the floor of her mother’s house in book #2. She just left – no vanished – and we were dying to finally know what happened to her and Evan. Cue Book #3…two years later and Emma is still messed up (maybe more than before) and Sarah is still running from Jared. *Exhales* We were really hoping that Emma had got her shit together and was going to go find her man (Evan). *Exhales again*

If you haven’t figured it out by now Emma worked our last nerves. She did everything but what the hell we wanted her to do. So there were times (a lot of times) were we screaming: “Just die already. Just stop breathing bitch!” Yes, that is how bad she worked our nerves. But we guess the unpredictable makes for a great story! And Out of Breath is definitely unpredictable at its best. This book had us second guessing everything we read in the previous books, what we read 60 seconds before, and what the hell we were reading period. LOL! This book made us so crazy we can’t even think straight anymore! Seriously we were pulling our hair out and slamming the kindles down and walking away and texting each other!

What we liked…
·        Rebecca Donovan introduced some great new characters, which could possibly have a spin-off book later (hint hint)
·        That we finally got to know Evan’s friends from Santa Barbara (did we mention they are an AWESOME addition to the book)!
·        That even though the book was unpredictable – Evan was still Evan! And we LOVE us some Evan!

What sucked…The Epilogue!!! If this is in fact the last book it left us with a look of huh. We would have rather her buy the tree and swing in the Epilogue (which we thought was really sweet). We were expecting exciting and sweet and more insight into their future. Granted it was sweet it just wasn't what we wanted. Ugh!!! We were looking for a lot more than what we got from the Epilogue!

Our Pump Fist Moment…when Evan threw away the napkin with Kendra’s name on it…then he fixed Emma a drink and gave her a napkin with his number on it. It made us go SCREAM - Put that Mack on her Evan!!!!

Our say what now moment…when Emma dismissed Cole (poor Cole) without even saying a word. Say what now? Oh yeah it happened just like this… 'I slid my hand down to rest on his chest and could feel his heart beating faster. That’s when I realized that mine wasn't  My pulse was even, and my skin wasn't tingling like it usually did when he touched me…But I remained silent, still stunned with the realization that our connection was gone. And he heard every unspoken word.' Once again poor Cole! He never stood a chance once Evan came back in the picture. Poor poor Cole!

What pissed us off…that letter that wasn't even a letter but two damn sentences. The letter Emma wrote Evan’s mom, the one that changed Evan’s life. We really, really, really wanted to know what the letter said, but we were very disappointed it was a huge let down!

Our favorite part…was when Emma was about to drown herself and decided that she could not give up. Even if you've never been suicidal you can still relate to having to release dead weight from your life in order to move on. 'And then I broke into a run, letting pieces of me fall along the way. Shedding the young girl who feared which of her mother’s personalities would enter the house each night. Stripping off the belief that if I were perfect, I’d be easier to love. Stomping on the doubts that made me question my worth, never feeling like I was enough. And crushing the guilt that convinced me I would hurt everyone I cared about, leaving me incapable of being loved.' At this point we were cheering for Emma! We were tired of feeling sorry for her and we were so glad that she was finally figuring it out.

We are not sure if we want the story to end like this. It seems like there is so much left to tell. Even Sarah and Jared have a story to tell (hint hint). Will Rebecca Donovan leave us holding our breath until we are ‘Out of Breath’ or will she give us another book?