We are still on Central Jesse Cloud Nine... 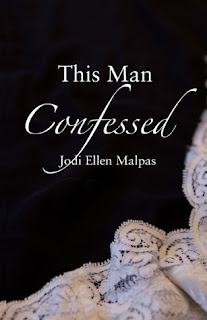 This Man Confessed (This Man Trilogy) by Jodi Ellen Malpas

THE STUNNING CONCLUSION TO THE THIS MAN TRILOGY IS A #1 NEW YORK TIMES BESTSELLER!

The Manor, the very place where their passionate love affair began, fills with guests on what should be the happiest day of Ava and Jesse's lives. She has accepted that she'll never tame the fierceness in Jesse-and she doesn't want to. Their love is profound, their connection powerful, but just when she thinks that she's finally gotten beneath his guarded exterior, more questions arise, leading Ava to believe that Jesse Ward may not be the man she thinks he is. He knows too well how to take her to a place beyond ecstasy . . . but will he also drive her to the brink of despair? It's time for this man to confess.
We hope you can handle the 556 talk:
We need to stand up and give 'This Man Confessed' a standing ovation!!! Jodi Ellen Malpas wrote the hell out of this book. She might as well retire because there is NO WAY she can top this trilogy (especially this 3rd book). From cover to cover this book kept you excited, laughing, yelling, crying, and cheering!
Let's start with them damn handcuffs!!!! OMG!!!! It was about 10pm when I started reading this book and when I got to the handcuff scene - I got out of bed to get my cell phone so I could text Benita. So what if I woke up my husband in the process (there is no sleeping during a good book). But back to the book...so this lady (Ava) couldn't even walk down the aisle - he had to come get her. "I hold out my hand to him, and he pulls away from me, taking my offering gently and placing his lips on the back of it. Then he snaps a pair of handcuffs over my wrist." Pump fists - handcuff her arse Jesse!!! We are sick of her running!
And the Justin Timberlake reference had us cracking up! Jesse was ready to escape the wedding drama until they started playing a JT song. When she leans into him and says, "Hello, Justin." OMG we were SCREAMING - Go Jesse - Go Jesse - Go Go Go Jesse! Then he tells her he is about to tear that floor up! #Deadpan
So since Book #1 we have all suspected that Jesse was stealing Ava's birth control pills - he wanted to get her pregnant (even she knew they were not just disappearing). So why when he confesses his sins - this heffa runs yet again! That pissed us off sooooo bad - like you just got married and you leaving him already. Really? Really? In the words of Big John you knew he was a "crazy mutha fucker." Then when she decides to lie to him about being pregnant - we were ready to take her out! But of course she couldn't resist the power of Jesse!  'His eyes fall from mine to my stomach and linger for a while, and then I see a tear trickle down his cheek. It enflames the guilt further, but when he drops to his knees, I lose complete control of my own weeping.'
An absolute favorite part of the book, was when they were in Paradise and Ava thinks Jesse is implying she will be a bad mother and she won't let him explain. So Jesse begins the countdown! And Ava is not caring because clearly he can't do anything to her in the restaurant - clearly she does not know her man! 'Zero, baby. I'm snatched from my chair before my brain filters the final call of the countdown, and I'm on the floor, wrists pinned above my head and Jesse straddling my waist. My eyes are wide and the restaurant is silent. You could hear a pin drop. I'm staring up at Jesse who is unashamed and most unconcerned by our surroundings.'
After Jesse is done trampling her in the restaurant, he gets the biggest surprise of his life. And Ava is shocked to learn who the pale blue eyes belong too. Oh you thought we were going to tell it (LOL) - NOT a chance. Read the book!
'There is no need for a confession because he has nothing to confess. Our quiet exchange of understanding almost makes me forget that Coral is standing nearby.'
"I'm going to trample now." I tell him quietly, looking for his permission this time.
We love this scene! Finally Ava puts on her big girl panties and lets Coral lying arse have it! You not gone come in here talking about my husband is your baby daddy, and question my self respect (well she didn't tell her like that but you get the point). Ava got Coral right together and sent her on her merry little way.
And still there is more book to tell...
There is a car chase/crash, loads of Jesse trampling, Sarah's back, Carmichael's fatal car crash, bar fights, love triangles (past and present), secret children, knife fight, wall of Ava, stalker ex's, secret admirers who will buy it for you, and families reunited.
Seriously just when you think the book is over, Jodi throws another freaking curve ball! Hands down the best ending to a book series ever!!! The Epilogue even ROCKED! She took the time to tie up all loose ends, but she wrote the book so damn good we can't help but want more of Jesse Ward. And adding the voices of Jacob and Maddie to the story was brilliant. This Epilogue...words can't even describe how good it is.
"I'm so glad I hid those pills."
This just made us want to read the book again! We can never thank Jodi Ellen Malpas enough for introducing us to Jesse Ward!
This Man (Book #1) http://www.amazon.com/This-Man-Trilogy-ebook/dp/B00DB7RDOA/ref=pd_sim_kstore_2

Beneath This Man (Book #2) http://www.amazon.com/Beneath-This-Man-Trilogy-ebook/dp/B00DB7RDR2/ref=pd_sim_kstore_1