Nothing Could Prepare you for this Flight... 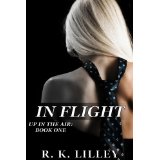 Amazon Summary: When reserved flight attendant Bianca gets one look at billionaire hotel owner James Cavendish, she loses all of her hard-won composure. For a girl who can easily juggle a tray of champagne flutes at 35,000 feet in three inch heels, she finds herself shockingly weak-kneed from their first encounter. The normally unruffled Bianca can't seem to look away from his electrifying turquoise gaze. They hold a challenge, and a promise, that she finds impossible to resist, and she is a girl who is used to saying no and meaning it. Bianca is accustomed to dealing with supermodels and movie stars in her job as a first class flight attendant, but James Cavendish puts them all to shame in the looks department. If only it were just his looks that she found so irresistible about the intimidating man, Bianca could have ignored his attentions. But what tempts her like never before is the dominant pull he seems to have over her from the moment they meet, and the promise of pleasure, and pain, that she reads in his eyes.
Chit Chat with 556 Book Chicks:
Tiffany ----> My cousin (LaToya) loaned this book to me via Amazon, so I didn't know what it was about. And I didn't go read the summary on Amazon. I just started reading it blind. OMG I am so glad I did - no summary could have prepared me for In Flight. So of course I had to share my excitement with my girls - Benita and Monika. And we haven't been the same since.

Bianca is the perfect name for the blonde bombshell of this story. She is strong and confident, but in the same breath she is weak and vulnerable. And is running from her past that haunts her dreams. Even with her horrific past she is so self composed - its almost scary. The one thing she is insistent upon is - she is not looking for a relationship. But neither is James Cavendish.

"What would a girl like me do without someone like you? Perhaps everyone is good for someone."

Let's not forget Stephan, Bianca's HOT best friend. You love everything about Stephan in this book. He is the best friend everyone wants to have...he is social, protective, and loyal. And he's been looking out for Bianca since they were 14 years old.

The sex scenes are AMAZING! Even when they are not actually having sex - the touching between them is so intense you want more. But please believe this book is not just about sex, there is plenty of drama in the air and on the ground.

There was nothing we didn't like about this book. It was a breath of fresh air. It was a much needed vacation from working too hard.