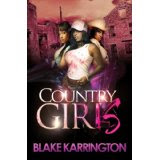 For the record we LOVE Blake Karrington!!! Country Boys I, II, and III all made our Top 12 of 2012 Book List. I think we were excited about Country Girls but we also didn't want to make the mistake of comparing it to Country Boys. Because Van and Tee (from Country Boys) were both intelligent, hardworking, ride or die women. They were in a league of their own...so of course we thought no other females could compare to them.

Anyway back to Country Girls - MHB crew - Prada, Diamond, Tiffany, Tiki, and Niyah. And then there was Gwen, who was an original member but no longer kicked it with the crew. These girls were out robbing dope boys for their come up. Prada was fake dating a big time drug dealer, Mayo, to set him up for a hit from Niyah. It was crazy because Mayo would have given her anything she asked for...so she really didn't need to set him up.

Gwen was dating Mayo's best friend Jr., but she had nothing to do with the hit. Gwen was also the ex-girlfriend and baby momma of Niyah's husband Chad. Hence the reason she was really not down with the crew anymore. We understood why Gwen didn't like Niyah but it also took us back to Van and Tee (from County Boys). Van and Tee held down the same man but never let it interfere with business. But hey this NOT County Boys!!!

So once we got over this NOT being County Boys - we really did enjoy the book! It was a high drama book. From Niyah trying to keep her secret life from Chad, Prada playing Mayo for his money stash, Diamond sleeping with Mike (Mayo's friend) to get a rental extension, Gwen testing her loyalty to MHB or her man Jr., to Alexus being taken in by Prada and the crew. There is a lot of action in this book to keep you guessing. And Blake did a great job with the cliffhanger!

Prada vs. Mayo and Niyah vs. Jr. who comes out a winner? 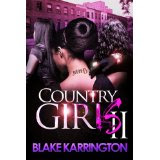 Before we get started this review will be my (Tiffany's) opinion and will not speak for all of 556 Book Chicks.

I was disappointed in Country Girls II. I don't want to give away the book, but the story was a little choppy in book 2. Blake did bring in a character we all love - Van (from County Boys). I'm just not sure if I liked how she was introduced to the book. Now Van was Niyah's cousin..so Niyah went to Van for a connect. If you didn't read Country Boys - Van didn't want Que to be a part of that life, so I found it hard to believe that she would help her female cousin with a connect.

Then the feud between Niyah and Gwen just got out of control. To the point where I was like put a bullet in both of them and keep the story moving. And take Chad weak behind with them. They spent too much time trying to decide to be loyal to MHB or declare war on each other. MHB didn't look like a top notch crew - they looked like a bunch of amateurs. Alexus proved her gangster by saving Niyah's life. But the BOSS of the crew was Diamond - she took care of her problem and kept it moving...no questions - no second thoughts.