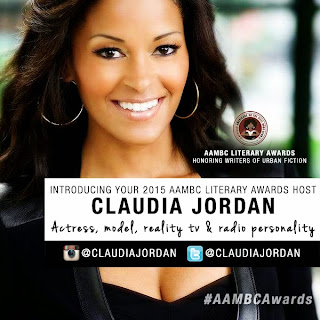 The AAMBC Literary awards has announced that actress/model/TV and radio personality Claudia Jordan will host the inaugural celebration in Atlanta on Saturday, June 13, 2015 at the 444 Theatre located at 444 Highland, Atlanta, GA 30312. Jordan is known for co-hosting mainstream news shows such as Access Hollywood, Entertainment Tonight, and EXTRA before joining BRAVO's top franchise reality series Real Housewives of Atlanta. Since joining RHOA and Radio One's Rickey Smiley Morning Claudia Jordan has quickly become one of the most in-demand personalities in 2015. "We wanted Claudia because she has a great sense of humor and we knew she would relate to both a literary and entertainment based audience" founder Tamika Newhouse explains. "We are overjoyed that she accepted and will be our mistress of ceremony this year."

Jordan's career began in the pageant circuit when she was crowned Miss Rhode Island Teen and Miss Rhode Island USA. She became the 2nd African American to ever do that in the state of Rhode Island. This led to her landing national commercials such as Coors Light, Sears, Pepsi and Visa and appearing on the second season of Celebrity Apprentice. She finally made a home for herself when she hosted her own weekly show on Sirius/XM Radio on The Foxxhole, called "The Claudia Jordan Show". In 2014, Jordan moved to Atlanta, Georgia where she joined The Rickey Smiley Show and Bravo’s wildly popular reality show The Real Housewives of Atlanta.

This June, Jordan will grace the stage by hosting The AAMBC Awards for the first time in Atlanta. The award show will be the last event of a celebratory weekend dedicated to AA literature and honoring unknown and well-known writers that have made an impact in the last year. The 2015 AAMBC awards will be held at the 444 Theater located at 444 Highland, Atlanta, GA 30312.

For more information go to www.aambcawards.com

Keep up with The AAMBC Awards via Twitter & IG at: @AAMBCAwards