I need medication after this one... 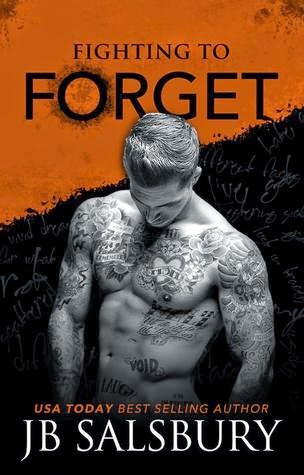 Fighting To Forget by JB Salsbury

556 Book Chicks did not see this coming...
Holy Mutha of Books! I was not prepared for this Rex book. Lawd know I was not prepared. I had no idea that Rex's story would have me sobbing and crazy giggling like an idiot. I thought I loved JB Salsbury before, but she went totally out the box with this story. There is never a moment were you are comfortable...you are anxious the entire book!

It's so hard to write this review without spoiling it for you. I want to talk about everything that freaking happened. But let me say if you thought Jonah and Blake had it going on...baybbeee Rex is definitely on their level. And I love that we got to catch up with Jonah and Raven...and Blake and Layla too.

I still can't believe this was Rex's story...we know Rex from the cage and the band, but that's all we really knew about him. We didn't know that Rex has a serious case of OCD or that Rex had an extreme childhood. OMG I cringe just thinking about what poor Rex had to endure. We also didn't know that Rex dreamed about his childhood but he couldn't figure out what was real or not. He had blocked out all the bad from his life in order to stay in the present.

Remember Layla's friend Mac, from the bar that Ataxia performs at? Well honey we didn't know that her and Rex had crossed paths before and she was basically stalking him trying to figure out how to get close to him again. We also didn't know that she held all the information to piece Rex's life back together. Yikes

This is nothing compared to what JB Salsbury brings to the table. At one moment you want to kick the shit out of her and the next you want to freaking hug her ass (talking about JB here). I promise this book will make you extremely bipolar. I was never bipolar about Rex though. I was swooning over him from the beginning until the end. Now Mac on the other hand, one minute I wanted to slap her and the next I was fist pumping something awesome she said or did. LOL!

OMG did I mention that Rex has that sexy alpha male dominant thing going for himself. There is this one part when he is helping Mac with the flat tire on her bike (motorcycle). Hell Yeah, Mac rides a motorcycle without a helmet - I told you she was awesome. Anyway Rex is helping her and thinking about how unsafe it is for her to be in the dark alley with a flat. 'If I had a girl, I'd spank the hell out of her if she put herself in this situation.' Say what now? Did I mention how much I loved this alpha male side of Rex? Oh I think I did (hehheee).

So one of my favorite parts was when Caleb was trying to ask Mac out and Rex was about to go ape. 'He's fucking flirting with her. Pain throbs in my jaw and my stomach muscles contract. I was making out with her ten seconds ago, and already I feel some kind of proprietary claim on her. Caleb's my best friend, but I don't want his fucking country ass anywhere near Mac. Or his hands and lips. Shit, I'm halfway thinkin' I'd gouge his eyes out just for looking at her.' But wait it gets better...Mac proceeds to put her number in Caleb's phone and now Rex is fuming. Later Mac tells him that she gave Caleb his number and not hers...I was cracking the hell up! Smart girl that Mac and she gets a Hi5 for making Rex jealous and a Hi5 for being hella smart.

I hate I can't piece together the connection he has with Mac. Damn it I want to talk about it soooooo bad, but you will have to read it for yourself. I will tell you that Dominick Morretti (Raven's father) is not finished wrecking lives. And you want to dig his ass up and kill him all over again. But the outcome of this shit storm makes you smile at the end.