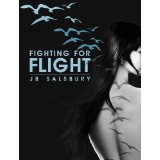 Fighting for Flight (The Fighting Series) by JB Salsbury

Amazon Summary: What happens when in order to win, you’re forced to lose?

The only daughter of an infamous Las Vegas pimp, Raven Morretti grew up an outsider. Liberated from the neglectful home of her prostitute mother, she finds solace as a mechanic. With few friends, she’s content with the simple life. Flying under the radar is all she knows and more than she expects.

Until she catches the eye of local celebrity, UFL playboy, Jonah Slade.

Weeks away from his title fight, Jonah is determined to stay focused on everything he’s trained so hard to achieve. Undefeated in the octagon, he’s at the height of his career. But resisting Raven’s effortless allure and uncomplicated nature is a fight he can’t win.

Jonah trades in his bad-boy reputation and puts his heart on the line. But when her father contacts her, setting in motion the ugly truth of her destiny, Jonah must choose. In a high-stakes gamble where love and freedom hang in the balance, a war is waged where the price of losing is a fate worse than death.

Will the hotheaded Jonah be able to restrain his inner fighter to save the woman he loves?

Or will Raven be forced into a life she’s been desperate to avoid?

556 Book Chicks are sooooo talking about this book:

Bad Boy Fighter, Jonah, will not attach himself emotionally to anyone (not since the death of his father). He is known for sexing the girls down and leaving them. And of course all the girls want to dig their claws into the professional MMA fighter. But Jonah won't give them the time of day...

Until he meets Raven, his car mechanic...she is fun and down to Earth and has Jonah second guessing his single status. It doesn't take Jonah long to realize he can't live without her. Jonah tries so hard to play it cool, but their chemistry was building at a fast pace. Jonah's friends notice the change in him the minute Raven steps foot in his backyard. His thoughts even shock him...

'A deep moan from one of the guys at the bar has me turning my head. They have their greedy fucking eyes locked on my girl and her friend. My girl?'

We were dying laughing like you know damn well you want that girl. Stop trying to fight it!!! They go from just being friends to practically living together in a blink of an eye. We love a man that knows what he wants and waste no time getting it. We love Jonah!!! But all good things must be faced with some challenges. But Raven gets major points for not trying to hide who she is..."my mom's a prostitute and my dad was her pimp." Say what now?

"You're unlike anyone I've ever known. You're kind, smart, funny, gracious...hell, you even laugh at Blake's jokes. I want you. And that includes everything that makes you who you are."

Which is a great intro into Blake. OMG Jonah is not the only sex pot in the book. Blake can hold his own in a room full of women. "There is something about this guy that goes beyond his super-hot, bad-boy fighter good looks. That alone would make any girl fidgety. His light brown hair is buzzed short, drawing all the attention to his bright green eyes. His looks alone are enough to leave a trail of broken hearts in his wake." So of course he made the book boyfriend HOTTIE list. He is a stand out in this book!!! He instantly became a protector of Raven's and had Jonah's back when needed. And we can't wait to read more about Blake!!!

When Dominick (Raven's pimp daddy) called her - our stomach dropped. We knew she was thinking good things but come on your pimp of a daddy calls after 20 years just to catch up. NOT! When Dominick tells her that its time for her to start working for him - we were SCREAMING! Really what daddy would want his daughter to be a prostitute???

Dominick: "I used your mother to create another like her. The next generation, if you will, to meet the growing demands of my business."

Raven: "You want me to be a hooker for you?"

Dominick: "Hooker is such a ugly word," he tsks. "I prefer escort. But, yes, that's what you were created for. That's why I made you. It's time you fulfill your purpose."

Tiffany's Opinion ----> You talking about being fighting MAD! This was totally unexpected. I had been texting my cousin, LaToya, since the start of the book. This was a calling matter - I had to call her. All she could say was that daddy evil. Evil hell no Dominick is the devil. He knew too much information about her and that made me think he was the one dating Eve (Raven's best friend). I'm thinking back and I'm like Eve is dating a powerful, secretive man. OMG OMG its got to be Dominick. Now I am mad at Eve for running her damn mouth. Why are you telling Raven's business to your mystery man? That's why you can't tell people your business because they get caught up in the moment and start talking. Damn you Eve - damn you!!! JB Salsbury has you questioning everyone in this book!


WE DON'T WANT TO SPOIL ANYMORE OF THE BOOK!!!
But don't think this is the end...there is still plenty of book left. Excitement - edge of your seat, biting your nails excitement!!! Jonah makes a deal with the devil, Raven runs into her mother, Eve learns the truth about Vince, Raven meets Jonah's mother, Jonah fights for the MMA title, and that bitch Candy is still in the mix.
Did we mention that we cried like a freaking baby throughout parts of this book...JB Salsbury has us using all our freaking tissue with this book.
Tear Jerker Moment: When they are in the garage listening to the song 'Halo' by Beyoncé and Raven tells Jonah how he is her saving grace. And he turns to her and says, "It's funny, this thing between us. Every concern or emotion we feel, it's mutual. Here you're thinking I'm saving you, when all this time it's been you who saved me."﻿

Somebody pass the freaking tissue! There are too many GREAT moments in this book. We don't want to give them all away! So we will keep the ending a secret....