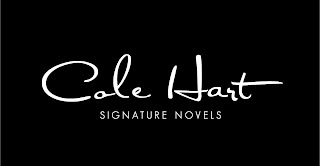 The Chicks: How did you get the name Cole Hart?

Author Hart: I got the name from some of my homies here in prison, except it is spelled Cold Heart. It was actually one of my mentor's idea to spell it Cole Hart.

The Chicks: How old are you?

Author Hart: I just turned 39 years old. I got incarcerated at the age of 25.

The Chicks: How long have you been writing?

Author Hart: I started writing in 2001 in Macon State Prison, so I've been pushing my pen twelve years straight.

The Chicks: What keeps you motivated to write?

Author Hart: My family, The Bankroll Squad...and of course my faith and hopes of being a writer on the streets.

The Chicks: So you first book was self published...what made you team up with a publishing company?

Author Hart: Self publishing is cool, but by me being in here (prison) I am kind of limited to being exposed. So being signed with David Weaver has helped me out a whole lot.

The Chicks: Do you have any immediate goals you wish to accomplish?

Author Hart: I want to make the New York Times best sellers list. And hopefully a release to the streets since I'm up for parole this year.

The Chicks: Who are some of your favorite Authors?

The Chicks: We have to know...did you read the 'Fifty Shades of Grey' books?

Author Hart: I have never read 'Fifty Shades of Grey,' but I damn sho' wanna write something that is going to sell millions of copies like it did.

The Chicks: What books did you enjoy writing?

Author Hart: Besides 'The Throne,' I definitely enjoyed writing 'Godfather of Atlanta' (originally 'A-Town Veteran'), which is coming real soon and guaranteed to be a classic.

The Chicks: How did you create the characters for 'The Throne' books?

Author Hart: 'The Throne' was created from my imagination. I did a good bit of research on the history of some of the Queens like Elizabeth and so forth. And definitely the women drug lords in Mexico and Columbia.

The Chicks: Who is your favorite character from 'The Throne' books?

Author Hart: My favorite characters from 'The Throne' is Papa Bear and Falisa, but I really love them all.

The Chicks: How did the collaboration for 'Red Bottom Bitches' come about?

Author Hart: We were tossing around story plots, having our round table discussion. Torica and myself collaborated on the plot over the phone, then we got with David Weaver and it was a wrap after that. 'Red Bottom Bitches 2' is definitely a full length novel and it will take over the summer.

The Chicks: Who outside of the TBRS Authors would you like to collaborate with on a book?

Author Hart: There are a few female authors outside the squad that I would love to work with, but I will keep it under wraps until the time is right.

The Chicks: Do you have any words of wisdom for some of the young kids out here?

Author Hart: The words of wisdom I have is something I wrote called 'The Street Advocate' and it's strictly for the younger brothers that are looking to follow the wrong steps that I once followed and glorified in. So being up close and personal with "THAT LIFE" got me a "LIFE SENTENCE" and with that being said I write for the cats that want to get in here where I'm at. Everybody will know about 'The Street Advocate' across the world in a little while.

The Chicks: And last but not least, is there one thing you would like to say to your fans now that you have their attention?

Author Hart: I would like to give a BIG shout out to 556 Book Chicks for turning up and repping that TBRS family. My Calbo with my brother Torica Tymes, 'Red Bottom Bitches' is already out! 'The Throne III: The Finale' is on the way and so is the 'Godfather of Atlanta.' And last but not least, Write House Publishing is accepting manuscripts. Keep your eyes open for the Hood Romance Novel 'Scarlett' by Tiece. She's definitely about to make some noise in the Industry.

We <3 you Author Cole Hart and we wish you all the success in the world! We will see you on the streets soon!