OMG...SOMEBODY GET US A STRIPPER POLE 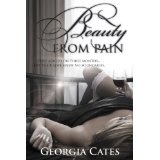 Beauty from Pain by Georgia Cates

Amazon Summary: They agreed on three months...but their love knew no boundaries. Jack McLachlan is a wine making magnate and easily one of Australia’s most eligible bachelors. His success and wealth makes him no stranger to the complications of romantic relationships and that’s why he goes to extreme measures to avoid the hassle. He prefers simplicity in the form of a beautiful female companion with no strings attached. He arranges relationships like business deals and they’re always the same. No long term relationships. No real names. It’s his game and his rules. He’s content to play as usual, but when Laurelyn Prescott enters his life, his strategy must change because this player is like none he's ever encountered. His world is turned on its head after he begins a three month affair with the beautiful American musician. Nothing goes according to plan and as he breaks more and more of his own rules for her, she’s exceptionally close to becoming something he never thought possible. His ultimate game changer.

The Book Chicks have been waiting to talk.....
It's been a long time since we have liked both the male and female character of a book. And Georgia Cates nailed that for us!!! OMG! We were so excited for this book...I (Tiffany) read it during Spring Break last week, and poor Benita couldn't work because I was calling her to go on Amazon and purchase this book. I wanted to share everything I had read so far...but of course she was SCREAMING don't tell me the book.

Seriously Georgia Cates had us hooked at, "Disclosing my identity complicates things, so you wouldn't know my name...I'm a very wealthy man. The three months we spend together. Would be the best of your life. You'd never be able to top what you'd experience with me."

Our response - where the hell do we sign up??? Seriously she is only in town for 3 months her best friend has already dumped her for her brother's best friend and she is trying to avoid her best friend's brother because she is clearly not interested in him. So what does she have to lose with this mystery man??? Absolutely NOTHING! You wanna know his name - call him Don Juan for all we care - girl JUST CALL HIM PLEASE!!! Of course their first date didn't go the way we wanted. But she finally saw things our way..."He makes me want to get on all fours and crawl like a tigress." ME TO - ME TOO - Where do we sign up? Oh did we ask that already? LOL!

Jack Henry McLachlan (the mystery man) AKA Lachlan (his fake name) is like no other male character. He is not an undercover Dom or controlling...he is a sweet, reliable and romantic. But he has a story and he doesn't want to get burned by love. We can list a ton of instances where we knew he was in love with Laurelyn - but of course he would just deny them all.

"Laurelyn is mine. Not his."  Really Lachlan we thought it was just 3 months of fun. Hmmmmm

Laurelyn is a fighter. She has been through a lot and she is still all smiles. We love her spirit! We don't want to spoil the book - but OH MY does this girl have a story to tell. We want to talk about it soooo bad, but we will let you read it for yourself. Damn just talking about it makes us want to read the book again.

So we were a fan of Laurelyn all the way up until the end...this little heffa left without giving him a chance to sort out his feelings. Yeah we know you're in love with him - hell his "mum," housekeeper, driver...they all knew you and Jack Henry were in love. You even confessed to him that you loved him..but you were too scared to give him this last day to sort out his feelings. Once again you had NOTHING to lose....

OUR FAVORITE PART...the pole dancing scene. Laurelyn confessed that she has taken pole classes for over 4years...so Jack Henry had a pole installed in his home. OMG!!!!!!!! When I tell you we were ready to take pole dancing lessons and install a pole. This scene was sooooo freaking HOT!

Jack Henry -----> "Baby you've fucked my mind without touching my body....Baby...You're bewitching on that pole."

This isn't the end for Jack Henry and Laurelyn...Beauty from Surrender is coming May 30, 2013!